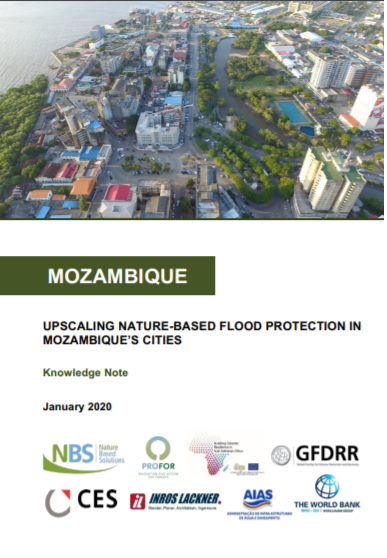 Mozambique is one of the countries most exposed to coastal and river flooding in Africa. It is also among the countries most vulnerable to current and future climate risk. The World Bank and GFDRR have been active in providing emergency recovery after hydrometeorological disasters in Mozambique and has increasingly been supporting the Government in increasing climate resilience at municipal and regional levels, including through the application of nature-based solutions.

One of the first nature-based urban flood management interventions supported by the World Bank, with funds from the Pilot Program for Climate Resilience (PPCR), and by the German Cooperation through the KfW Development Bank is the Green Urban Infrastructure (GUI) intervention in Beira, Mozambique.

To maximize results from nature-based projects, such as GUI, it is important to review the benefits for urban flood risk management as well as lessons learnt in their implementation and explore how such approaches can be best adjusted and scaled up to other cities in Mozambique and other countries. In addition to a review of lessons learnt in Beira, two other cities in Mozambique, Nacala and Quelimane, were selected to understand how nature-based approaches could be used to inform future investments to increase urban resilience to flooding and erosion.