UR Insider: Key Takeaways and Insights from Understanding Risk Balkans

The Ignite presentations on the first day of Understanding Risk Balkans.

As extreme weather becomes the “new normal” in the Balkans, governments and communities across the region are striving to better understand the climate and disaster risks they face so that they can put in place the appropriate policies and strategies.

It was against this backdrop that hundreds of experts and practitioners from the resilience and disaster risk management community, including dozens of young people, shared ideas, best practices, and lessons learned on identifying, communicating and assessing risk at Understanding Risk (UR) Balkans, the first ever gathering of the 10,000-strong UR community in the region.

In case you couldn’t make it to Belgrade, here are some of the most revealing insights and takeaways from the conference. UR Balkans was hosted by the Global Facility for Disaster Reduction and Recovery (GFDRR), the World Bank and the Government of Serbia, with the financial support of the European Union. 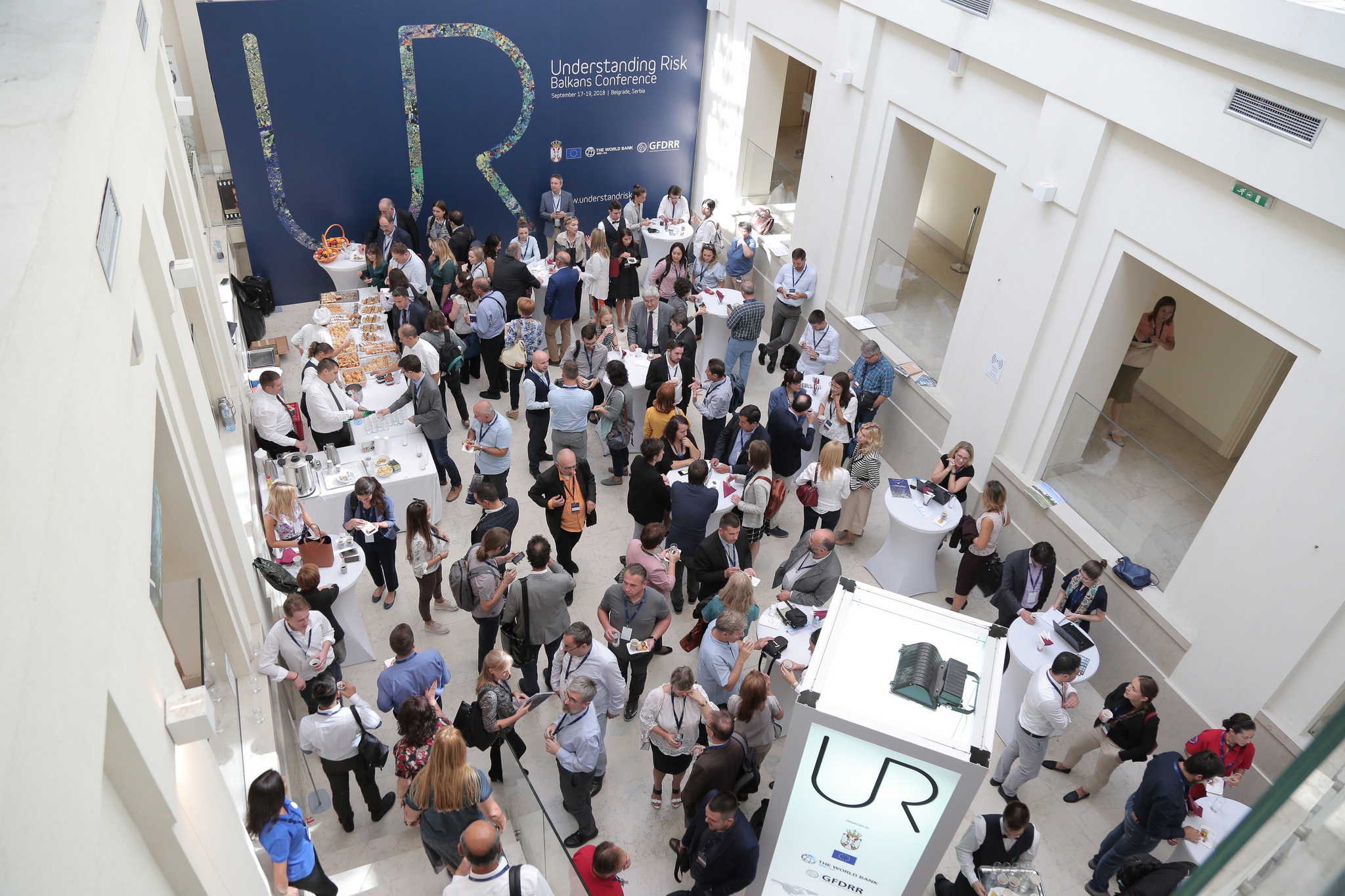 Understanding Risk (UR) Balkans brought together over 350 attendees from 46 countries.

The promise and potential of disaster risk insurance

At the session on catastrophe insurance, there was cautious optimism that the World Bank’s Southeast Europe Catastrophe Risk Insurance Facility Project (SEE CRIF), which is being implemented by Europa Re, could go far toward increasing affordable catastrophe insurance coverage for homeowners, farmers, small and medium-sized enterprises (SMEs) and municipalities in the region. However, while the project has helped increase the availability of highly affordable disaster insurance products, demand has been slow to pick up, which helps explain why the disaster insurance protection gap – or the gap between insured losses and economic losses from disasters –  in the Balkans remain high. One barrier to closing this gap, which was discussed in the session, is that that governments continue to distribute post disaster subsidies and financial aid indiscriminately, thus making homeowners, farmers, SMEs and municipalities reluctant to buy insurance coverage.

The importance of regional cooperation in addressing hydromet hazards

Hydrometeorological (hydromet) hazards in the Balkans know no boundaries –  last year’s scorching heatwave and the destructive flooding of 2014 put this in a stark light. During the session on multi-hazard early warning systems, panelists broadly agreed that a regional challenge requires a regional response that leverages the data, expertise and capacity across the region. While the countries of the Balkans are increasingly opening up their observational data to their peers in part due to the European Union’s flood directive, political and administrative obstacles remain which are inhibiting deeper regional cooperation, including on transboundary flood forecasting. There are some signs, however, that political will is building which could help surmount these obstacles, paving the way for the region to fully capitalize on emerging technologies and approaches which are facilitating real-time monitoring of hydromet hazards.

By building resilience to shocks, social protection systems are increasingly proving to be effective instruments for helping the most vulnerable prepare for and respond to disaster – perhaps no more so than in the case of Mexico and its social inclusion program (PROSPERA). The session on social protection focused on how Serbia could emulate Mexico’s example – and, by some accounts on the panel, this will be no easy feat. As Roberto Sanchez Avalos of the Mexican Ministry of Social Development elaborated, data gaps, targeting and coordination remain key challenges they continue to face in implementing PROSPERA, even over two decades after it was first launched back in 1997. A key lesson from the discussion is that close collaboration between social protection and disaster risk reduction agencies is crucial to overcoming these challenges, particularly in the areas of long-term capacity building, early warning system development, and the gathering of recovery data.

Unpacking the seismic risks in the housing sector

A major challenge in European and Central Asian countries is the seismic threat faced by certain multifamily buildings that are believed to have outlived their design lifespan, and suffer from serious deterioration and disinvestment. Regrettably, the magnitude of this risk is not adequately quantified or understood. The session on seismic risk sought to set the stage for this problem. Preliminary results show that there is significant risk to the housing sector in the region, which is exacerbated by the lack of maintenance, and owners’ modifications of the buildings’ structural elements.  A key takeaway from the session is that seismic risk in the housing sector is a very urgent issue, and one that is worthy of more attention, more analytics, and certainly a lot more financing. Radu Văcăreanu, Professor at the Technical University of Civil Engineering, Bucharest, sounded the alarm that compliance with seismic codes does not necessarily mean that buildings are safe from earthquake hazards. 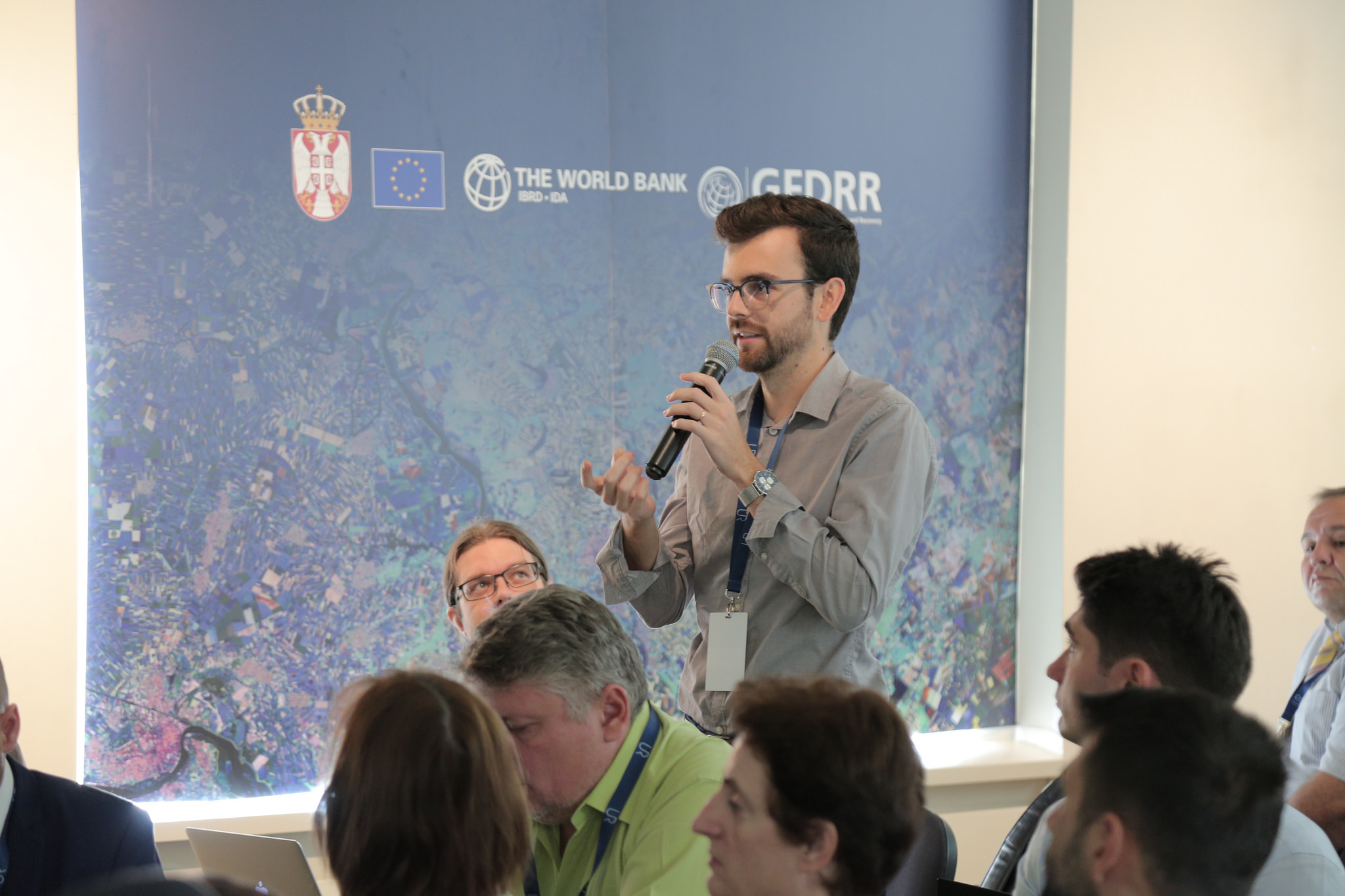 A participant poses a question during the session on community resilience.

The value of understanding risk for road asset management

Following recent extreme weather events, road authorities across the region are seeing the value in developing and utilizing a proactive and risk-informed approach, according to panelists in the session on road asset management. Authorities are especially eager to leverage risk assessments as a tool for making decisions on maintenance priorities and practices. But challenged by gaps in the availability and quality of road data, as well as limitations in human and financial resources, the extent to which risk assessments will be mainstreamed into road asset management in the region remains to be seen. While new and disruptive technologies have the potential to facilitate this process, risk assessment methodologies developed in the European Union, New Zealand, and the United States have, thus far, generally required a plethora of data and resources.

Across the Balkans, innovative tools and technologies are generating an explosion of risk data. During the session on community resilience, Cultural Heritage Without Borders Albania’s Lejla Hadžić had, for instance, showed how her organization leveraged participatory mapping techniques to gather risk data and information on Albania’s cultural heritage. During her Facebook Live interview just prior to her keynote speech, design scientist Melissa Sterry did echo the sentiment in many sessions that one key challenge now is how to make this data useful to policymakers, planners, practitioners and even ordinary citizens: “We’re having to look at how we process that data – we’ve got more than we can deal with.“  Thankfully, new approaches are also emerging which are helping to solve this problem – at every scale from the individual to system level. At the session on flood protection, Aida Hadzic-Hurem, Disaster Risk Reduction Project Manager for UNDP Bosnia and Herzegovina, showcased the Disaster Risk Analysis System (DRAS), an online platform that enables rapid computer analysis of scientific hazard data.

The case for open data for resilience

If there was one theme that was prominent across all sessions, it’s that despite the explosion in risk data, data gaps remain which make it difficult to get a full understanding of the climate and disaster risks in the Balkans.  There was agreement in the session on open data that there was much progress to be done to make DRM data in the region open and accessible, but also a firm consensus that these efforts would be well worth it given the importance of good data for effective disaster risk management. Georgiana Ilie, Reporter and Senior Editor of DoR Magazine in Romania, shared an example of how open data helped inspire action for resilience in her home country. Addressing a question from the audience about whether the open data movement could increase the volume of data, without necessarily improving its quality, GFDRR’s Pierre Chrzanowski responded that it’s impossible to assess data quality unless that data is out in the open in the first place – a strong rationale for promoting open data for disaster risk management.

Were you at Understanding Risk Balkans? We would love to hear from you about the key takeaways, insights, or lessons learned that you drew from the sessions! Tweet us @GFDRR and @UnderstandRisk.