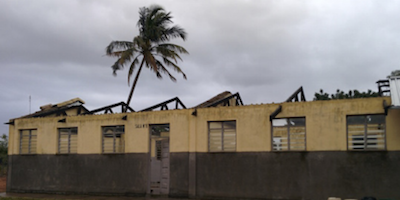 Mozambique has experienced heavy flooding this year, the worst since 2000. Areas heaviest hit are in the Limpopo River Basin and Northern Province of Nampula. According to the National Disaster Management Institute, more than 200,000 people have been affected, 135 lives lost and 2,000 homes destroyed, ultimately leaving thousands of families homeless. The province of Gaza has seen the worst of the flooding with more than 150,000 people displaced. Additionally, the Maputo Municipality estimates damage to infrastructure at US$29 million; mostly to housing and drainage.

Surge aftersurge of flood waters along the Limpopo River completely submerged the city of Chokwe and kept residents in temporary shelters even though a partial clean-up of the city began when flood waters receded briefly in between storms. The government deployed military units to rescue and assist populations at risk, sometimes airlifting trapped residents by helicopter. Even the provincial capital city of Xai-Xai was not spared and farmers in low lying areas experienced heavy crop damage. Many people were forced to move to higher ground. To complicate matters, key power lines were also damaged reducing the power supply exports to South Africa from 1,500 megawatts to 650 Megawatts.

A full 58 percent of the population of Mozambique is at risk of water related hazards. Furthermore, it is estimated that GDP growth is reduced by 1.1 percent annually (US$105 million) due to flooding. It is the third most vulnerable GDP (to disasters) in Africa and is partly due to the country sharing nine river basins with neighboring countries. The below video highlights just how vulnerable the country remains to massive flood events with before and after images of the flood affected areas.

The Government of Mozambique led the response effort and due to the large scale of the disaster, requested assistance from all national and international humanitarian partners in accordance with the National Contingency Plan for the Rain and Cyclone Season of 2012-2013.The local Red Cross also continued its work reducing the risk of waterborne diseases through the use of sanitation equipment in all affected areas. Additionally, the Humanitarian Country Team composed of United Nations agencies and civil society organizations worked closely with local authorities conducting assessments, analyzing and pre-positioning key non-food item stocks in strategic locations.

Following a Response Proposal to the international community seeking US$30.6 million, the United Nations Central Emergency Response Fund disbursed US$5.13 million to United Nations agencies to aid in the response.

Displaced women crossing on improvised structure due to destroyed bridge from recent flooding.

A quick response Disaster Risk Management team was immediately deployed following the flooding to assist the Government in assessing post disaster needs and formulating an implementable recovery plan. Based on initial consultations, recommended areas of focus for a potential quick response were transportation, health, education, housing, urban planning and disaster risk reduction. At the request of the Government, the World Bank will continue to work very closely with Disaster Risk Management authorities to better assist with recovery and reconstruction needs.

As part of an ongoing grant from the Global Facility for Disaster Reduction and Recovery (GFDRR) and funds from the Pilot Program for Climate Resilience and the International Development Association, the World Bank is already supporting Mozambique with extensive interventions in disaster risk management and climate change adaptation. Technical assistance includes a detailed remote sensing technique survey in critically affected areas which helps to provide early warning. The rehabilitation of two early warning radar systems in the areas of Beira and Inhambane are also considered to be essential for improved flood warnings. This is coupled with assistance to the national hydro-meteorological network.