Where Are All the Jobs ? A Machine Learning Approach for High Resolution Urban Employment Prediction in Developing Countries 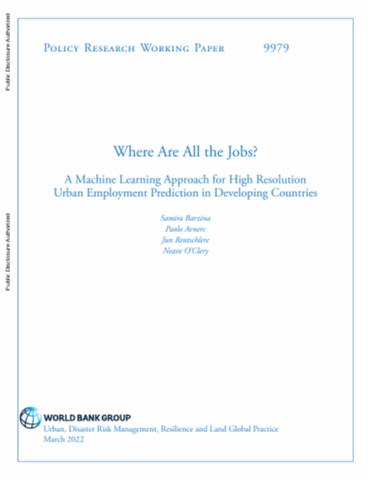 Globally, both people and economic activity are increasingly concentrated in urban areas. Yet, for the vast majority of developing country cities, little is known about the granular spatial organization of such activity despite its key importance to policy and urban planning. This paper adapts a machine learning based algorithm to predict the spatial distribution of employment using input data from open access sources such as Open Street Map and Google Earth Engine. The algorithm is trained on 14 test cities, ranging from Buenos Aires in Argentina to Dakar in Senegal. A spatial adaptation of the random forest algorithm is used to predict within-city cells in the 14 test cities with extremely high accuracy (R- squared greater than 95 percent), and cells in out-of-sample ”unseen” cities with high accuracy (mean R-squared of 63 percent). This approach uses open data to produce high resolution estimates of the distribution of urban employment for cities where such information does not exist, making evidence-based planning more accessible than ever before.