When It Comes To Disaster Preparedness, Communities Know Best

The multi-purpose storm and flood shelter in Duy Tan commune, chosen by the community and funded by the Vietnam Managing Natural Hazards Project, is one of the physical structures that has been constructed. Photo: World Bank/Pham Ba Linh.

Follow Ms. Phuong, a villager from Duy Tan commune in Vietnam’s Quang Nam province, as she demonstrates how disasters affect her commune, and how community-based disaster risk management activities have helped her commune to be more prepared when disaster strikes:
See the slideshow here.

“Why are you talking about disaster preparedness, do you want disasters to come to you?” Tran Thi Duong, chairperson of the Women’s Union of Duy Phu commune in Vietnam’s central Quang Nam province, recalled the question a fellow villager posed when she raised the topic. “That very night, a flash flood hit. One family was almost buried in mud when their house collapsed. After that incident, the villagers really understood the need for disaster preparedness,” she recounted.

Duong was among representatives from 100 communes across central Vietnam. They had met to discuss and share lessons following the implementation of disaster risk management activities in their communities. “All of my village’s rice field is submerged when water from the Thu Bon River spills over,” Ho Thi Phuong, a villager from Duy Tan commune in Quang Nam province explained. “Except for the last two years, the flooding has happened every year.”

Vietnam is one of the countries most exposed to natural hazards such as floods, typhoons, droughts and landslides. In the past two decades, disasters have caused more than 13,000 deaths and damage to property in excess of US$6.4 billion. The country's central region is its most vulnerable. Around 65% of all recorded storms occur in this area, which is already marked by higher than average poverty rates. Floods in 2010 destroyed 350,000 houses and caused disruption to telecommunications, irrigation systems, energy supplies and transport networks.

While the Government of Vietnam has been able to effectively carry out emergency relief and recovery operations in the aftermath of disasters, the recurring risks from floods, droughts and typhoons present challenges to the country’s quest for continued long-term growth. In light of this, more attention needs to be given to disaster risk preparedness and mitigation. As a part of the ongoing US$150 million Managing Natural Hazards Project, the Government of Vietnam is using US$18.5 million to support community-based disaster risk management across 100 communes in 10 central provinces. The preparation and implementation of the project is supported with technical assistance from The Global Facility for Disaster Reduction and Recovery (GFDRR) to help integrate global best practices on disaster risk management. 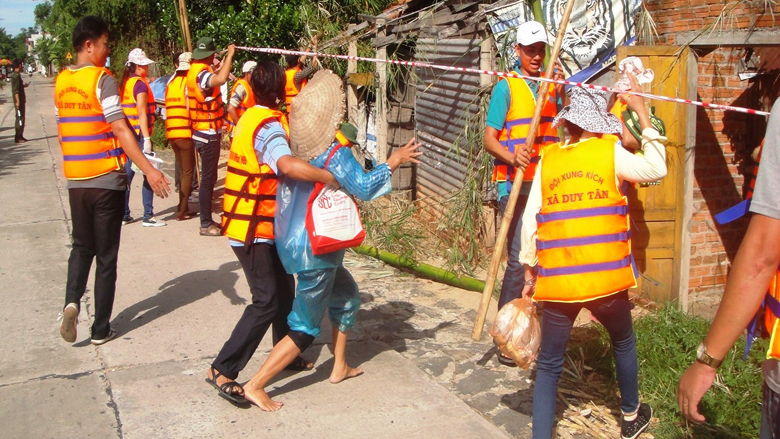 Disaster preparedness drills were held as part of the disaster risk management activities across the communes, and involved a total of 2,500 participants. Above, a flood preparedness drill is being conducted in Duy Tan commune, before the annual flood season in July. Photo: World Bank/VNHaz Project Management Unit.

The approach taken is unique as it recognizes that communities know best when it comes to living with natural hazards. It takes into account the knowledge and expertise of local villagers, which has proven effective in reducing losses from disasters. “The Community-Based Disaster Risk Management Program, which was launched in 2009, supports Vietnamese communities to reduce the negative impact of disasters at the local level,” Van Phu Chinh, Director of the Disaster Prevention Bureau under Vietnam’s Ministry of Agriculture and Rural Development, observed. “In areas where the community is highly involved in disaster risk reduction activities, losses from disasters are significantly lowered.”

Working closely with local government and the communities, the World Bank-supported project is helping communes prepare for and manage disaster risks through community cultural and school activities, workshops, training and small-scale infrastructure investments. As part of the community-based approach, villagers choose physical structures that will be most helpful to them in the event of disasters. They are then involved in the supervision of their construction and are responsible for operating and maintaining these structures. In this way, local ownership is encouraged.

“Apart from the small structures, another important component is raising the awareness of local people,” Phan Xuan Hai, Director of the Project Management Unit for Binh Dinh Province noted. “This is to help local people and authorities have a better understanding of what needs to be done when disaster strikes, and all communes now have a disaster risk preparedness plan.”

The first phase of the project provided training for over 10,600 villagers across the region, focusing mostly on vulnerable groups that included women and children. Fourteen disaster drills were conducted involving 2,500 participants, and all communes developed disaster risk preparedness plans. The construction of small-scale infrastructure such as roads or storm shelters that were proposed by the communities is nearing completion. “I think the most successful part of this project is the community disaster risk preparedness plans proposed by the communities themselves,” Nguyen Minh Tuan, disaster risk management consultant, noted. “The plan can also be applied to the household-level, detailing preparations needed such as necessities and equipment to be stored, and the roles of each family member in case of a disaster.”

Duong is now an advocate for the community-based disaster risk management investments in her commune. “In the past, there was nowhere to go when a storm or flood hit. Now we can go to the community shelter, built with funding from the project.” She added, “When storms and floods come, trees and even houses are uprooted. People have been killed by lighting. From the training, we know how to protect ourselves when storms and floods come. We know how to strengthen our houses, and how to avoid getting struck by lightning.”

Based on the success of the project’s first phase, community-based disaster risk management activities will be rolled out across the remaining 73 communes using project funding, and may be expanded to other provinces in the future if it is institutionalized at the national level as part of the Government of Vietnam’s National Community-Based Disaster Risk Management Program. As Chinh observed, “The Managing Natural Hazards Project has placed communities at the center of disaster risk management. It has helped communes create disaster preparedness plans, built infrastructure that is useful to them, raised their awareness about natural hazards, and has the potential to be replicated across Vietnam.”