Against the backdrop of a changing climate, extreme weather is fast becoming the new normal in South Asia. The landlocked kingdom of Bhutan, which has seen severe flooding more frequently over the past decade, is no exception. Most recently, in June 2021, flash floods brought about by heavy monsoon rains claimed the lives of 10 people.

Determined to build a more resilient future, the Royal Government of Bhutan is making headway on strengthening its ability to deliver timely and accurate hydrological and meteorological (hydromet) services that can save lives and livelihoods in the aftermath of extreme weather events. With the support of the European Union and the Japan–World Bank Program for Mainstreaming Disaster Risk Management in Developing Countries, GFDRR is playing a key role in driving that progress.

Average preparation time for daily weather forecasts has been cut in half, from four hours to two hours.

In line with a roadmap previously developed by the national government in collaboration with the World Bank, a top priority for the technical team has been to support ongoing efforts by the National Center for Hydrology and Meteorology (NCHM) to enhance weather forecasting services across the country. Partnering with the NCHM, the team has assisted in operationalizing the SMART-MET system, a highly advanced, state-of-the art platform for weather forecasting and dissemination that has helped reduce the average preparation time for daily weather forecasts by half—down to two hours from the previous four required. NCHM officials have also observed improvement in the accuracy of weather forecasts. Moreover, the team has worked with the NCHM on installing an automatic weather observations system, a ceilometer, and a wind profiler, among other critical hydromet infrastructure, at Bhutan’s sole international gateway Paro International Airport, one of the most dangerous airports in the world. 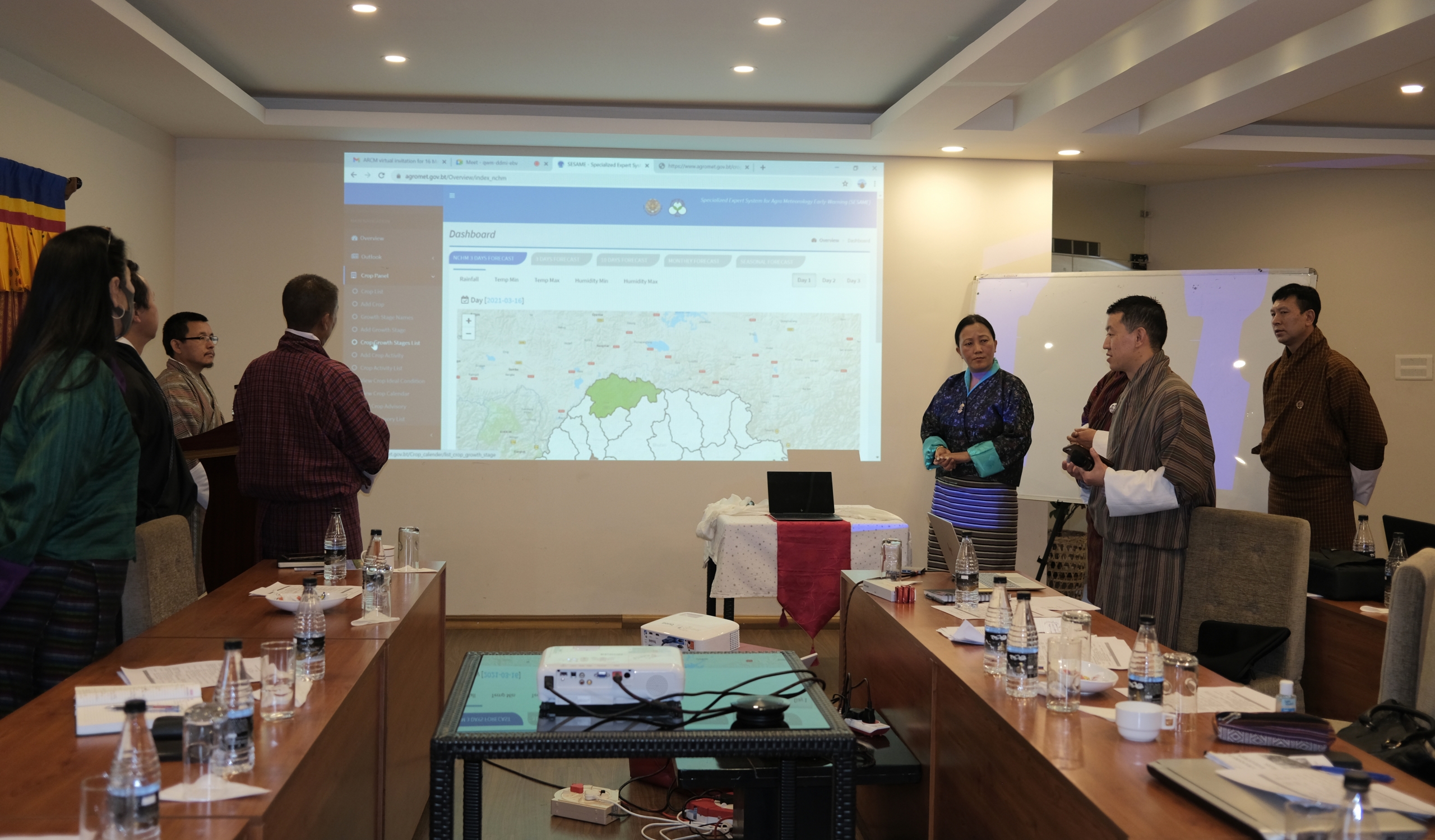 “The agro-meteorological services would help us to give proper information to farmers. So if we can provide accurate and timely weather information, it will especially help small farmers to produce and have secure food production.”
—Kailash Pradhan, Specialist, Department of Agriculture, Royal Government of Bhutan

Recognizing the vulnerability of the country’s predominantly rainfed agriculture sector to extreme weather, as demonstrated by the recent heavy flooding, a further priority for the team has been its continued support for the development of a targeted weather advisory service for farmers called the Agrometeorological Decision Support System (ADSS). Designed to help farmers make farm-level decisions, the system, which is currently in its pilot phase, uses machine learning algorithms to generate specific crop advisories for various locations based on weather data from the NCHM. Housed in a dedicated web portal, ADSS also has a feedback system that will allow users to provide recommendations for improvement.

GFDRR’s support for hydromet development in Bhutan is only one among a range of the facility’s engagements in the country. In another example, a technical team has partnered with the Asian Disaster Preparedness Center on a deep dive assessment of the institutional landscape for disaster risk management in Bhutan, with the goal of informing national efforts to strengthen DRM. The facility also continues to promote knowledge sharing and policy dialogue about hydromet among Bhutan and its neighboring countries through the South Asia Hydromet Forum (SAHF). In addition to convening high-level representatives from relevant government agencies and development institutions, SAHF is developing a regional program of technical support and capacity building for improved hydromet and early warning services across the region.

It is key for technical teams to understand the needs and challenges of client countries so that they can provide assistance in areas where they can add the most value. In the case of Bhutan, national authorities had already been making concerted investments in the development of hydromet services, with the assistance of development partners such as the World Bank. Drawing on consultations with key officials, the technical team thus designed its support so that it built on these investments in a way that was aligned with the long-term vision of relevant agencies such as the NCHM.