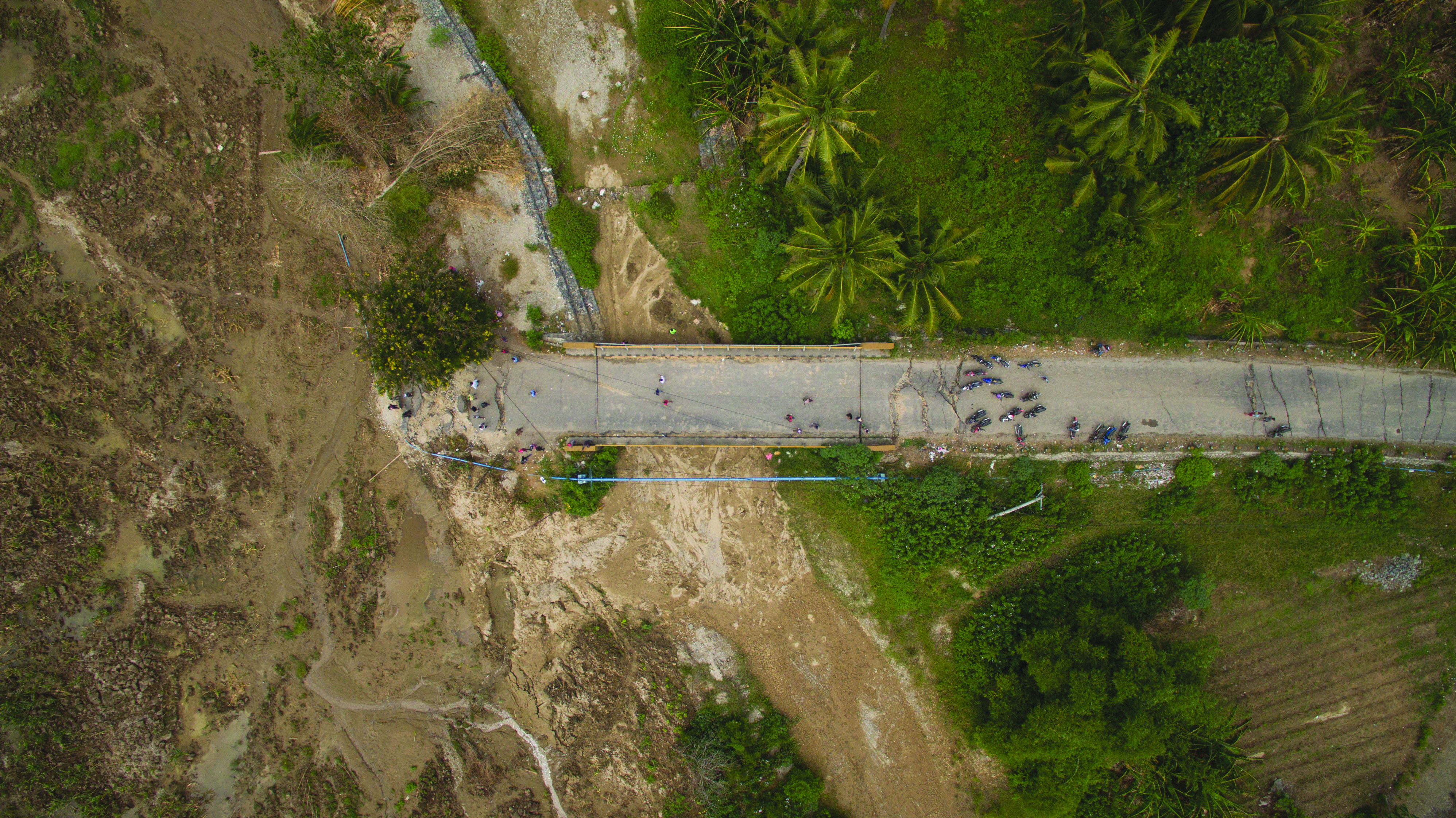 The earthquake and tsunami that hit Central Sulawesi in September 2018 were in many ways unique disasters, giving rise to a cascade of hazard events that affected four districts in Central Sulawesi and causing extensive damages. A magnitude 7.5 mainshock triggered three nearfield tsunamis that reached the shores of settlements along Palu Bay within six minutes, and ground shaking led to devastating landslides and liquefaction effects in densely populated areas of Palu and Sigi. The disaster led to more than 4,400 fatalities, displaced approximately 170,000 people, and caused over $1.3 billion in economic losses.2 Previous to that, a series of earthquakes struck Lombok in July and August 2018, causing 561 fatalities and displacing almost 400,000 people. And the eruption and subsequent partial collapse of the Anak Krakatau Volcano in December 2018 led to a tsunami that caused 437 fatalities and displaced almost 34,000.

As part of the World Bank’s response to the disaster, GFDRR supported a rapid assessment of the damage to affected areas in Central Sulawesi using the Global Rapid Post-Disaster Damage Estimation (GRADE) methodology. The assessment was conducted by the World Bank’s Disaster-Resilience Analytics and Solutions (D-RAS) team, a group of technical experts that develops custom-built tools and solutions in the area of disaster risk management.

The advantage of this approach is the speed at which the damage estimation can be produced. Within 10 to 14 days of a disaster event, stakeholders can access loss estimates and visualize the spatial distribution of damages. This can support the development of post-disaster recovery and reconstruction strategies, and inform appropriate, timely, and efficient courses of action. For the Central Sulawesi earthquake and tsunami, the GRADE assessment was the first report to be released globally, providing sector-based preliminary economic damage estimates to inform disaster recovery and reconstruction processes, and informing budgetary considerations.

The speed with which the damage estimation was produced— within 14 days—has proven effective in giving stakeholders quick access to the economic cost and spatial distribution of damages, to help develop post-disaster recovery and reconstruction strategies and inform appropriate, timely, and efficient courses of action. The assessment helped to inform the design of support for the government of Indonesia to supplement relief and reconstruction efforts in the disaster-affected areas of Central Sulawesi.

In FY19 GFDRR provided $3 million in grant financing that will strengthen resilience and preparedness in Indonesia against future disasters. The technical assistance activities supported under this grant will enhance project outcomes under the contingency component activated under the IBRD-funded $100 million National Slum Upgrading Project and the IBRD-funded $150 million Central Sulawesi Rehabilitation and Reconstruction Project, which are supporting the reconstruction and strengthening of housing settlements and public facilities in the affected areas. Technical support on disaster- and climate-resilient transport infrastructure recovery in Central Sulawesi and nationally also supports the contingency component activated under the IBRD-funded $25 million Western Indonesia National Roads Improvement Project. In addition, the grant is supporting the preparation of the proposed Indonesia Disaster Resilience Initiatives Project (IBRD-funded $160 million), which will strengthen the capacity of government authorities to prepare for future natural hazards through an integrated end-to-end multi-hazard early warning system, with critical priority investments in geophysical monitoring systems, capacity building, and instrumentation.

GFDRR has also supported the resilient recovery process in Central Sulawesi by helping to assess the post-disaster impacts on the housing, transport, and social infrastructure sectors, including through structural vulnerability assessments of public buildings and an assessment of debris waste management opportunities. Recommendations included seismic retrofitting and strengthening solutions, prioritized investment options for educational and health facilities, preparatory activities for recovery of selected roads and bridges, and deconstruction and debris waste recycling strategies. Rapid assessments of damages and impacts on early warning services and emergency management systems in Palu also helped to identify investment options for the restoration of basic earthquake monitoring and information services, and tsunami early warning services, in areas affected by the disaster events in 2018.

A history of partnership in Indonesia

Following the 2004 tsunami, the World Bank, along with several global partners, contributed to the recovery and reconstruction efforts in Indonesia by establishing the Multi-Donor Fund for Aceh and Nias. This fund managed approximately $655 million to rebuild 20,000 homes and a wide range of vital infrastructure to higher construction and resilience standards, including 3,850 km of roads, 677 schools, 72 clinics, and 8,000 wells and clean water sources. These interventions highlighted the importance of building resilience against future disasters into reconstruction efforts—a realization within the World Bank which led directly to the establishment of GFDRR. In addition to the support for resilient recovery, GFDRR’s other ongoing support to Indonesia includes efforts to develop investment options for urban flood risk reduction and management in selected cities, and improving preparedness and response planning for dams in selected areas. In FY19, new initiatives include a $3 million grant aimed at identifying priority investments in the transport sector, developing investment plans based on critical needs for multi-hazard early warning system platforms, and integrating resilient principles into resilient transport recovery, as well as a $200,000 grant for implementing a national disaster risk financing and insurance strategy.