Together with climate change, rapid economic growth and urbanization, China’s intensifying disaster risk is putting a strain on the country’s resources, environment, and ecology. Against this backdrop, understanding and tackling disaster risk in China has never been more critical. An excerpt from our knowledge note, Learning from Experience: Insights from China’s Progress in Disaster Risk Management. Read the full chapter here.

All provinces (autonomous regions, municipalities) in China are, to varying extents, facing negative impacts from natural disasters. Two-thirds of Chinese territory suffers from the threat of flooding. The eastern and southern coastal regions and some inland provinces often encounter tropical cyclones. Droughts often occur in the northeast, northwest, and north China, and particularly serious ones are common in southwest and south China. Each province (autonomous regions, municipalities) has experienced destructive earthquakes that measure 5.0 or higher on the Richter scale. Of China’s territory, 69 percent is made up of mountains and plateaus, which suffers from frequent geological disasters such as landslides, debris flows, and rock collapses due to the complicated geological structure. The coastal region is prone to storm surges and red tides while the country’s forests and grasslands are prone to fires. Half the country’s population and more than 70 percent of Chinese cities are located in areas prone to meteorological, earthquake, geological, and oceanic disasters.

At both a global and a regional level, climate change has increased and will continue to exacerbate the frequency and intensity of disasters in China. 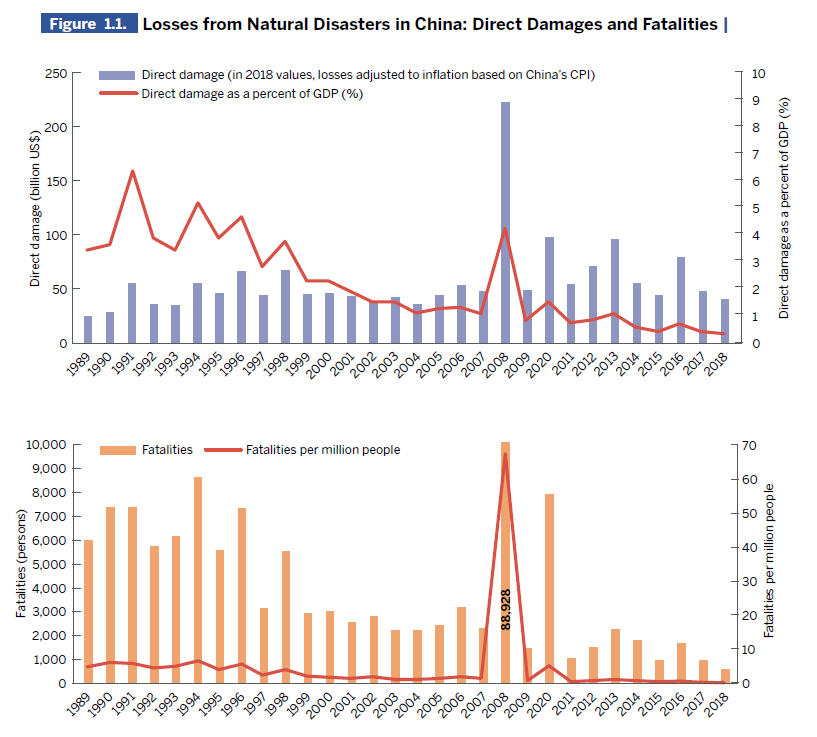 China is severely affected by monsoon weather and frequent meteorological disasters. Regional and partial droughts occur almost every year. Around 7 tropical cyclones hit the eastern coastal areas annually. Because China lies right in the region where the Eurasian, Pacific, and Indian Ocean plates meet, it suffers from frequent earthquakes due to still active tectonic movements. Most of the earthquakes that hit China are continental; they account for onethird of destructive continental earthquakes globally. China is a mountainous country, so the mountainous regions and hilly areas are frequently hit by collapse, landslide and debris flow. Fires often break out in forests and on grasslands.

Between 1989 and 2018, natural hazards caused the death of 195,820 people, and direct physical losses valued at 11,237 billion Chinese yuan (CNY, in 2018 values), or approximately US$1,698 billion (in 2018 values) (Figure 1.1). The direct damage has increased from US$47 billion in the 1990s to US$65 billion in the 2010s. Since 2000, 38.86 million hectares of crop have experienced a yield loss of at least 10 percent from natural disasters every year, out of which 4.95 million hectares were severely destroyed, representing a yield loss larger than 80 percent. Over the past three decades, the average annual fatalities per million people has been 5 persons, while direct economic loss as a percentage of gross domestic  product (GDP) has been 2.25 percent.

At both a global and a regional level, climate change has increased and will continue to exacerbate the frequency and intensity of disasters in China. The likelihood of super typhoons and intense rainfall is rising, making riverine and flash floods also more likely. Droughts and heat waves are also projected to become more frequent and severe with climate change. Geological disasters triggered by climate extremes, such as landslides and debris, are also projected to become more frequent. Together with population growth, economic development and rapid urbanization, and interregional trade integration, China is facing even higher disaster risks in the future; this may also bring cascading global impacts of increasing severity.