China has selected over 12,000 communities nationwide as demonstration communities for disaster risk reduction (DRR), with the goal of promoting capacity building on DRR in surrounding areas. Demonstration communities now cover every province in China. An excerpt from our knowledge note, Learning from Experience: Insights from China’s Progress in Disaster Risk Management. Read the full chapter here.

Building resilient communities can mitigate natural disaster risks (Michel-Kerjan 2015). Since the concept of a disaster-resistant community was first proposed in the United States in 1994 (Geis 2000), community-based disaster risk reduction (CBDRR) has been seen worldwide as a crucial approach to effectively improve disaster response capabilities, mitigating disaster losses and risks.

The most basic administrative unit in China, communities (or “villages” as they are called in rural areas), have played an increasingly important role in the country’s comprehensive DRR efforts in the 21st century. Underscoring China’s commitment to community-based disaster risk management, in 2007, the National Commission for Disaster Reduction of China began to implement a nationwide project to designate selected communities as demonstration communities for DRR. The goal is to promote and encourage capacity building on DRR in the surrounding vicinity, in large part by strengthening awareness about DRR.

Under the project, which is called the National Demonstration Communities on Disaster Risk Reduction, or NDCDRR, communities can apply to their respective provincial departments of civil affairs to become a Comprehensive Disaster Reduction Demonstration Community. The evaluation of the application covers three main components: infrastructure, community residents’ capacity, and disaster management. If the application is successful, the community is subjected to a standardized evaluation of its DRR capacity building efforts. All communities across China are encouraged to mobilize all possible resources from all types of stakeholders (e.g., various level of governments, industries, nongovernmental organizations, academia, volunteers) to facilitate DRR capacity building.

Below are several key trends on the progress and challenges in the development of China’s DRR demonstration communities. 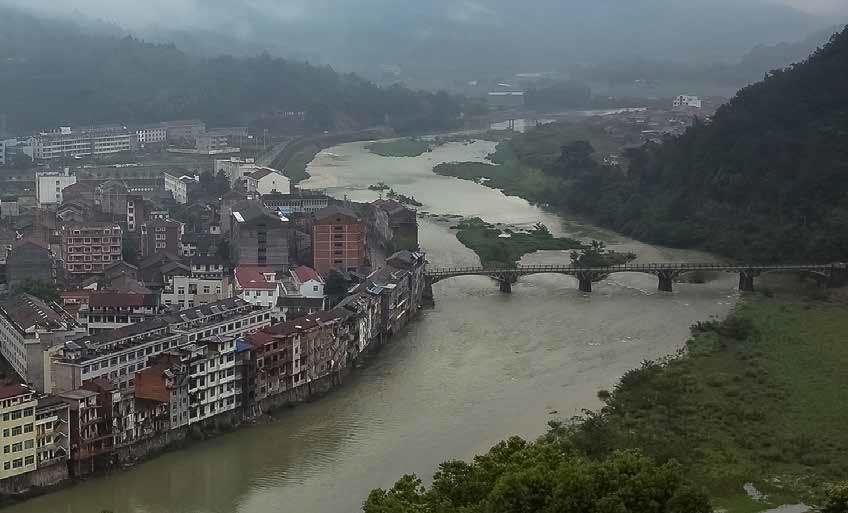 At the country level, the coverage rate varies considerably (Figure 4.1). Ninety-five DRR demonstration communities are located in Dongguan City, Guangdong Province—more than any other county. Counties and cities in the capital circle (Beijing, Tianjin, and Hebei), the Yangtze River Delta (Shanghai, Jiangsu, and Zhejiang) and the Pearl River Delta (Guangdong) account for over a third (35 percent) of the total number of DRR demonstration communities in China. 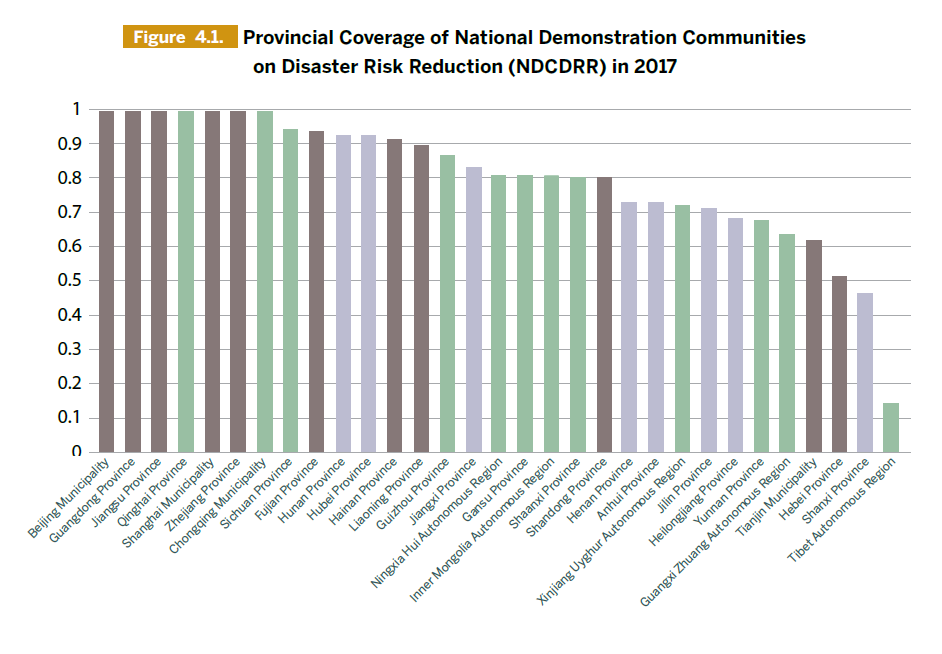 “The result of the joint efforts by the government, communities, enterprises, and other key bodies is that China’s progress on the development of its disaster risk reduction demonstration communities has occurred in tandem with the country’s reforms of disaster prevention and mitigation measures.”

At the same time, the Chinese government has consistently made the development of regulations and standards that can guide the continued development of DRR demonstration communities a top priority. In December 2011, the Ministry of Civil Affairs promulgated national standards for the establishment of comprehensive DRR communities. This was followed in 2016 when the General Office of the State Council promulgated the National Comprehensive Disaster Prevention and Mitigation Plan (2016–2020), which required the “strengthening the overall planning of disaster reduction resources and forces at the community level, and deepening the establishment of comprehensive disaster reduction demonstration communities.” This commitment was reaffirmed in 2018 when the Ministry of Civil Affairs, the China Seismological Bureau, and the China Meteorological Bureau jointly issued the Interim Measures for the Establishment and Management of National Demonstration Communities on Comprehensive Disaster Reduction. The establishment of the Ministry of Emergency Management of China in 2018 is expected to give further impetus to the growth of CBDRR. 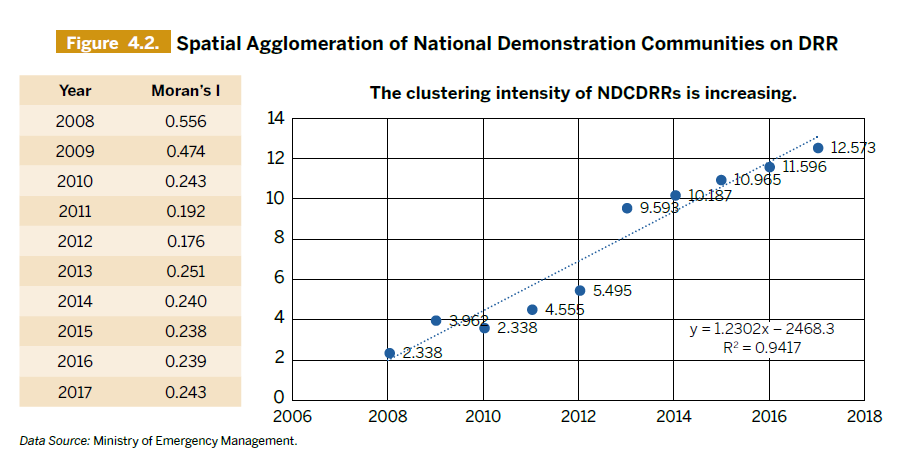 The analysis reveals, however, that there are significant differences in the demonstration effect of  communities. This must be a key consideration for policy makers and planners in the next phase of growth for DRR demonstration communities. The demonstration effect seems to be stronger in Jilin, Heilongjiang, Beijing, Eastern Shandong, Jiangsu, Zhejiang, Shanghai, Hunan, Hubei, Chongqing and Guangdong. The effect, however, seems to be weaker in Hebei, Shanxi, Guangxi, Yunnan, western Sichuan, Tibet, and southern Xinjiang.

It should be noted that there are significant spatial differences between the DRR benefits from demonstration communities seen in urban versus rural areas. Rural areas in China still account for about 50 percent of the total population, but only 30 percent of DRR demonstration communities are located in rural areas.** Over 70 percent of the communities can be found in cities and towns. This is expected to be a pressing issue in the National Comprehensive Disaster Reduction 14th Five-Year Plan, which is now being prepared.

The result of the joint efforts by the government, communities, enterprises, and other key bodies is that China’s progress on the development of its DRR demonstration communities has occurred in tandem with the country’s reforms of disaster prevention and mitigation measures, such as the improvement of infrastructure resilience, monitoring and early warning, emergency response, and so on.

Looking ahead, a key challenge will be how to sustain the progress that has been achieved. Regulations released in 2018 clearly put forward the “withdrawal mechanism,” which states that demonstration communities that fail to meet these requirements must take remedial measures, and the communities that continue to fail to meet these standards after efforts to rectify will be delisted. The effectiveness of this new mechanism remains to be evaluated in the future.

Notes on Data and Methods

In order to analyze the spatial and temporal distribution characteristics of the comprehensive disaster reduction demonstration community and its disaster reduction demonstration effect in the past 10  years, the relevant data from the Ministry of Civil Affairs, the Ministry of Emergency Management, the National Statistical Bureau, and the National Disaster Reduction Center of the People’s Republic of China were collected. These data included the list of the national demonstration community on DRR and the county disaster information (including the number of deaths and the amount of direct economic losses); county social and demographic, economic data; and the 2017 edition of the national provincial, municipal, and county administrative divisions. The spatial correlation and  clustering characteristics of demonstration communities by province are depicted by the global Moran index and the local Moran index respectively.