Mapping for sustainable development: The Open Data for Resilience Mapathon

The opening panel discussion at the OpenDRI mapathon at the World Bank (Photo credit: GFDRR)

On Wednesday, we joined more than 170 volunteers at the World Bank’s Washington, D.C. headquarters to draw little red boxes on a map of Alajo – a small town in the coastal metropolis of Accra, Ghana.

Some might find tracing a map of a city 8,500 kilometers away to be a surprising way to spend an afternoon. But there are good reasons for it. The boxes represented buildings, and they will go on to become invaluable geospatial data that will help the residents of Accra prepare for and respond to flood risk. Home to over two million people, Ghana’s capital city is highly vulnerable to flooding. In 2015, torrential rainfall left much of the city underwater, affecting 53,000 people and causing an estimated US$100 million in damages.

In just a little over two hours, the volunteers made over 3,000 edits to the map of Alajo, complementing the work of local teams in Ghana that are leading data collection efforts in the field. Once validated by more experienced mappers, the data collected will help guide improvements to Accra’s solid waste disposal management system, and also inform the upgrading of settlements vulnerable to flooding.

The volunteers were mapping as part of the Open Data for Resilience Initiative (OpenDRI) Mapathon. OpenDRI, an initiative of the Global Facility for Disaster Reduction and Recovery (GFDRR), is supporting improvements in Accra and other cities through the Open Cities Africa project, a regional initiative to build open data ecosystems for innovative, data-driven urban planning and disaster risk management. In Accra, activities under the project are aligned with the World Bank’s Greater Accra Resilience and Integrated Development (GARID).

While the mapathon had its fair share of newcomers, participants also counted dozens of mapping enthusiasts from the OpenStreetMap (OSM) community, a global network of volunteers who contribute to OSM, a free and editable map of the world that has been called the “Wikipedia of maps.” Nearly three-quarters of the volunteers were affiliated with the World Bank. 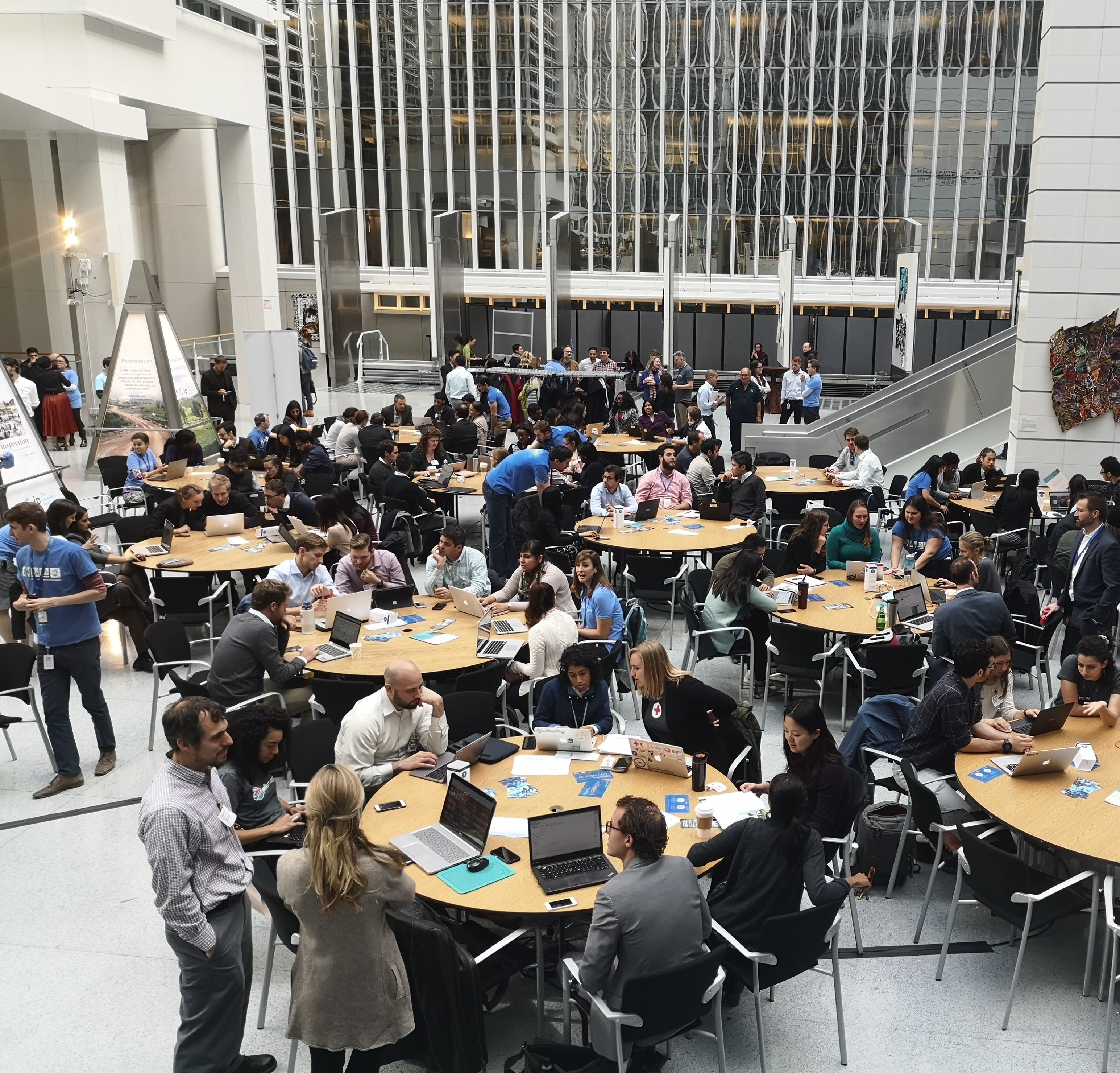 Mappers in action at the OpenDRI mapathon at the World Bank (Photo Credit: GFDRR)

During a panel discussion that kicked off the mapathon, senior Bank staff, led by Marianne Fay, the chief economist for sustainable development and Bernice Van Bronkhorst, director at the Bank’s climate change group, showcased how collaborative mapping was increasingly woven into the fabric of the bank’s disaster risk management (DRM) efforts. Urban specialist Dina Ranarifidy emphasized that “community was at the very core” of open source mapping, and pointed out the key role that local ownership and leadership played in driving mapping efforts for a World Bank neighborhood upgrading project in the Republic of Congo.

Examples of recent World Bank and GFDRR engagements which have leveraged the OSM community also include flood risk identification and assessment in Tanzania and post-earthquake recovery in Kathmandu, Nepal. To cite just one example of the results that have been achieved, the Ramani Huria project in Dar Es Salaam, Tanzania has, for instance, mapped 29 of the city’s wards, providing a clearer picture of the flood risk to 1.3 million citizens.

Throughout the event, we also heard lightning talks showcasing the potential of collaborative mapping to transform development practice well beyond DRM in sectors such as health and transport, featuring speakers from Mapbox, the American Red Cross, the U.S. Agency for International Development, and the World Bank’s Geospatial Operations and Support Team. Mapbox’s Mikel Maron memorably shared how collaborative mapping in Kenya has helped pave the way for participatory budgeting in the country’s education sector.

“You can use [OpenStreetMap] to measure the number of libraries in a city, or the number of tennis courts or tourist points of interest, you never know what you’re going to need in terms of your development challenge,” Marianne Fay, the World Bank’s chief economist for sustainable development, added in a video interview on the sidelines of the mapathon.

Over a decade after the OSM community first burst onto the global development scene, the sight of the World Bank headquarters’ atrium packed to the rafters with mappers, veterans and newcomers alike, would seem to leave little doubt that this global movement isn’t going anywhere. Just this year, the OSM community hit 1 million contributors worldwide.

As local communities increasingly bring their local expertise and leadership to the global OSM movement and as disruptive technologies like machine intelligence enhance the mapping process, there’s every reason to believe that – in partnership with organizations like the World Bank and GFDRR – the OSM community’s already transformative contribution to sustainable development is just beginning.

Want to be part of the global open source mapping movement? Check out these helpful resources developed and compiled by GFDRR’s Open Data for Resilience Initiative, and watch our video interview series from the OpenDRI mapathon at the World Bank.