Leveraging Space-Based Satellite Technologies for Emergencies and Disasters in China

In the 12 years since the Wenchuan Earthquake, China has established a relatively comprehensive space-based system of disaster and emergency monitoring. The development of this capability has strengthened the country’s disaster risk management practices. An excerpt from our knowledge note, Learning from Experience: Insights from China’s Progress in Disaster Risk Management. Read the full chapter here.

This meant that emergency responders could not put critical geospatial data on the location of damaged areas (e.g., the damage level of buildings, roads, and the physical environment) to use until after the critical 72-hour “golden” window, hampering efforts to rescue people who would have otherwise have had a larger chance of survival.

As shown in the timeline, in the 12 years since the Wenchuan Earthquake, China has quickly established a relatively comprehensive space-based system of disaster and emergency monitoring, which consists of integrated observations from satellite, unmanned aerial vehicle (UAV), station, and field investigations.

The development of this system has strengthened China’s disaster and emergency monitoring capabilities in three ways.

First, the acquisition of satellite data to prepare for and respond to disasters and emergencies is now virtually guaranteed. Domestically, China can rely on more than 20 civil satellites, including the Small Satellite Constellation for Environment and Disaster Monitoring and Forecasting. Internationally, in the emergency phase of severe disasters, China can obtain remote sensing satellite data from 18 space agencies worldwide free of charge through its affiliation with the International Charter on Space and Major Disasters. For example, after the 2008 Wenchuan Earthquake, the National Disaster Reduction Center of China (NDRCC) acquired more than 1,000 scenes of pre- image remote sensing data from 23 satellites, including five from China, to quickly estimate the extent of damage to housing, transportation lines, and farmland. 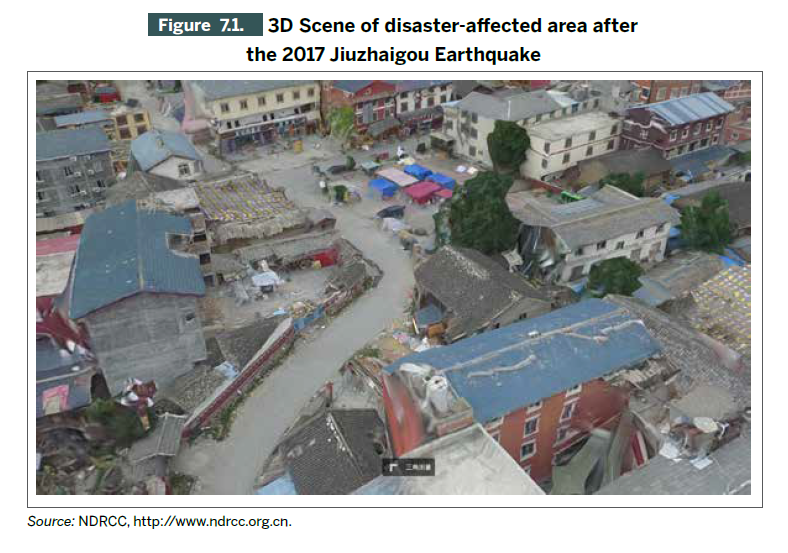 For example, remote-sensing technology was used in earthquake- induced building damage detection after the 2017 Jiuzhaigou Earthquake, in monitoring reconstruction progress after the 2008 Wenchuan Earthquake and the 2010 Yushu Earthquake, and in monitoring the landslide and the river blocking dam of the Yarlung Zangbo River in Milin County of Tibet on October 17 and 29, 2018.

Third, the timeliness, accuracy, and pertinence of the comprehensive assessment of severe natural disasters has been improved. Using  remote sensing data made available by medium- and high-resolution satellites, property losses can now be verified, thus ensuring the accuracy of damage numbers, when paired with loss statistics and field investigation. At the same time, comprehensive loss assessments can now be finished much more quickly. It took two weeks to complete this process in areas in Tibet affected by the 2015 Nepal earthquake, compared with two months in areas affected by the 2008 Wenchuan Earthquake (Table 7.1).

As one of the members of the International Charter on Space and Major Disasters and UN-SPIDER (United Nations Platform for Space-Based Information for Disaster Management and Emergency Response), China has also been providing strong support for international cooperation mechanisms on disaster response. It has already mobilized its satellite data system to aid emergency response to international disasters more than 40 times since 2007, including following the 2010 Haiti Earthquake, the 2010 Gulf of Mexico oil spill, the 2010 Pakistan floods (Zhang and Liu 2010), and the 2019 India flood inundation in parts of Morigaon district, Assam State. 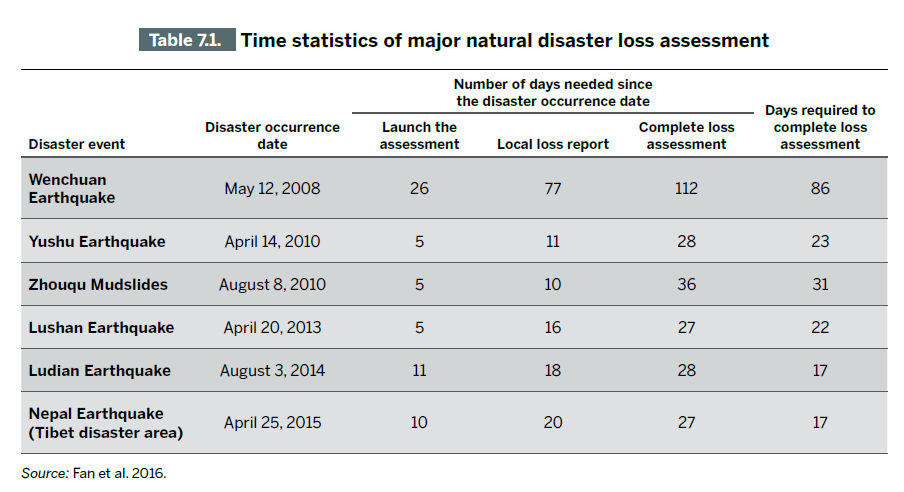 From the sky to the ground, China continues to make progress in  constructing an integrated disaster monitoring and evaluation system for emergency response and disaster management. A key challenge moving forward will be determining how to ensure that the country’s  comprehensive space-based system of disaster and emergency monitoring is better aligned with the needs of key decision-makers and planners at every level of government. Critical steps to address this include:

• Developing relevant standards and work procedures to ensure the proper sharing and service of data and products.