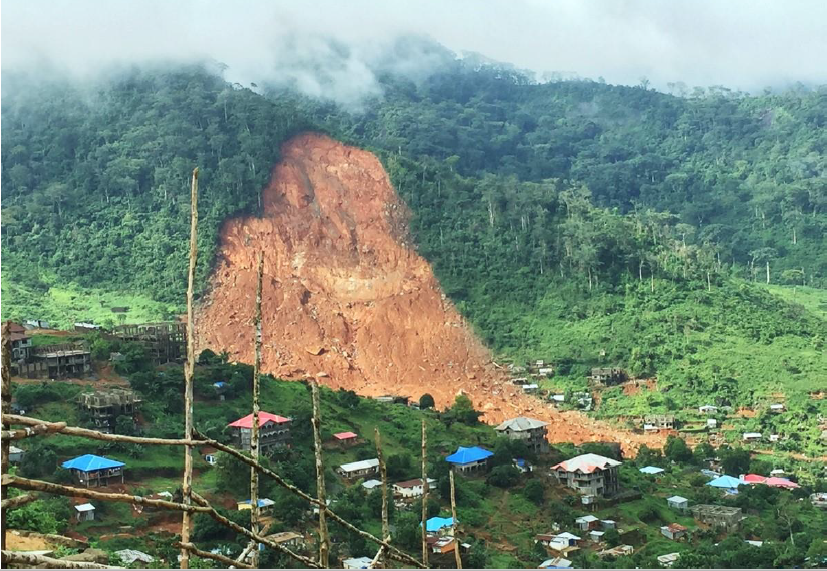 On August 14, 2017, a devastating landslide swept through the suburbs of Sierra Leone’s capital city, Freetown, affecting over 6,000 people and resulting in 1,141 deaths or missing persons. Freetown had endured three consecutive days of heavy rains which caused severe flooding and triggered the partial collapse of neighboring Sugar Loaf Mountain. Mudslides destroyed critical infrastructure such as schools, health facilities, and roads, in addition to the densely populated Regent residential neighborhood.

The government of Sierra Leone requested assistance from the World Bank to undertake a Rapid Damage and Loss Assessment and develop a framework for recovery. With support from the Africa, Caribbean and Pacific and the European Union (ACP-EU) Natural Disaster Risk Reduction (NDRR) Program, the rapid assessment estimated the total economic value of damages at $31.65 million, with an especially severe impact on the housing, social protection, and health sectors. The total cost for recovery efforts was estimated at $82.41 million, with at least half that amount to be dedicated to long-term resilient recovery, including territorial planning, improvements to legal and institutional frameworks, and mainstreaming disaster risk reduction principles into development and social planning.

According to the assessment, several factors contributed to the deadliness of the landslide, including unregulated construction practices—which undermined the solidity of the mountain slopes—deforestation from uncontrolled urbanization, and a preponderance of unsafe habitations in high-risk zones. The assessment also highlighted some of the institutional bottlenecks that were overwhelmed during the government’s initial response and opportunities to strengthen its ability to plan for long-term recovery and resilience.

Based on the recommendations of the rapid assessment, and with support from another ACP-EU NDRR project, the government developed a recovery framework that would prioritize strengthening Sierra Leone’s disaster risk management (DRM) institutions and capacities for enhanced recovery, preparedness, response, and resilience. Involving several government institutions such as the Office of National Security, the Environmental Protection Agency, the Ministry of Lands, Housing and Environment, the Freetown City Council, and the Western Area Rural District Council, the country’s emergency preparedness and response capabilities has been strengthened, as well as its institutional and policy framework for effective DRM.

This culminated with the inauguration in November 2020 of a new National Disaster Management Agency (NDMA) for Sierra Leone. This major milestone that involved collaboration between the Sierra Leone Meteorological Agency and the National Water Resource Management Agency will improve the country’s capacities to deal with a future disaster event, but also enhance its early warning systems. During the inauguration ceremony, His Excellency, President of Sierra Leone Dr. Julius Maada Bio underscored that “climate change resilience must be done in close collaboration with communities. Communities must have a vested interest and must participate in dialogues on disaster preparedness and management”.

Work is continuing to make a difference on the ground. Several key and timely activities were included as part of the roll-out of the NDMA, such as the update of the National Disaster Risk Management Policy which will reflect new institutional arrangements and realities on the ground, as well as the development of an Emergency Preparedness and Response Plan to ensure operational procedures and standards are in place in advance of a possible next disaster. The EU Delegation in Sierra Leone was kept abreast of these developments throughout their implementation, underlining the importance of sharing information on the ground between development partners.

The ACP-EU NDRR project also informed the $10 million World Bank-financed Freetown Emergency Recovery Program (FERP) which focuses on building back better infrastructure that had been damaged by the disaster. The city of Freetown is especially exposed due to its topography and location on the coast. This build-back-better approach and long-term resilience against landslides and flooding is essential for a country that is highly exposed to extreme weather and climate-related events and which will further intensify due to climate change.

Building on the success of the FERP, the government of Sierra Leone has requested the World Bank to prepare a new project to strengthen resilient development and service delivery in urban centers across the country, co-financed by the Global Environment Facility’s Sustainable Cities Impact Program. The project will build government capacity in urban planning and develop the local government’s own source revenue mobilization capacity. It will also finance urgent infrastructure priorities for enhanced solid waste management, and targeted neighborhood and market upgrading, with disaster and climate resilience as a key objective of the project and a core design principle. In addition, some of the immediate capital investment needs to setup the new National Disaster Management Agency are planned to be financed, such as the development of a national disaster Emergency Operations Center, which will provide a coordination platform during future disaster events.

From the devastating impacts of this landslide, Sierra Leone has managed to turn the situation around, spearheading important and needed reforms that create a culture of preparedness, resilience, and forward thinking that can anticipate and minimize the adverse impact of future shocks. A further request from the government of Sierra Leone has now come through to focus on building resilience of urban centers across the country.