Since the mid-2000s, China has embarked on a renewed effort to accelerate the development of the country’s agricultural insurance system. In 2007, China launched its latest round of pilot agricultural  insurance programs, characterized by a government-backed market approach with heavy premium subsidies. An excerpt from our knowledge note, Learning from Experience: Insights from China’s Progress in Disaster Risk Management. Read the full chapter here.

China has one of the largest agricultural sectors in the to establish an effective agricultural  insurance system that can attract the voluntary participation of agricultural producers and provide them with effective risk protection.

Four basic principles have underpinned this new round of pilot programs: government guidance, market operation, voluntary participation, and coordinated promotion. The goal is that farmers, enterprises, and the government all benefit from the agricultural sector’s ability to protect itself from loss or damage due to natural disasters and other risks (Wang et al. 2011). This chapter  presents several key observations about the development of  China’s agricultural insurance pilot. 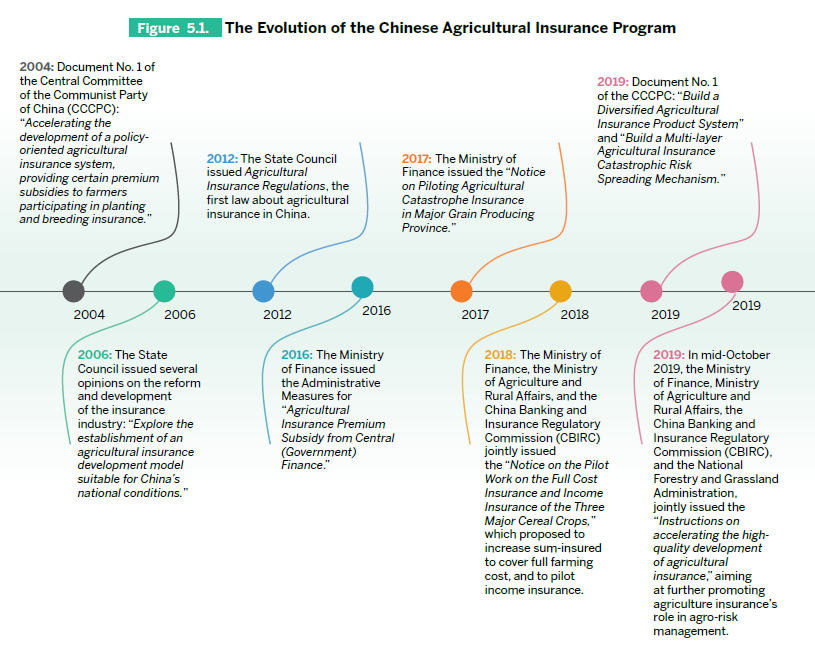 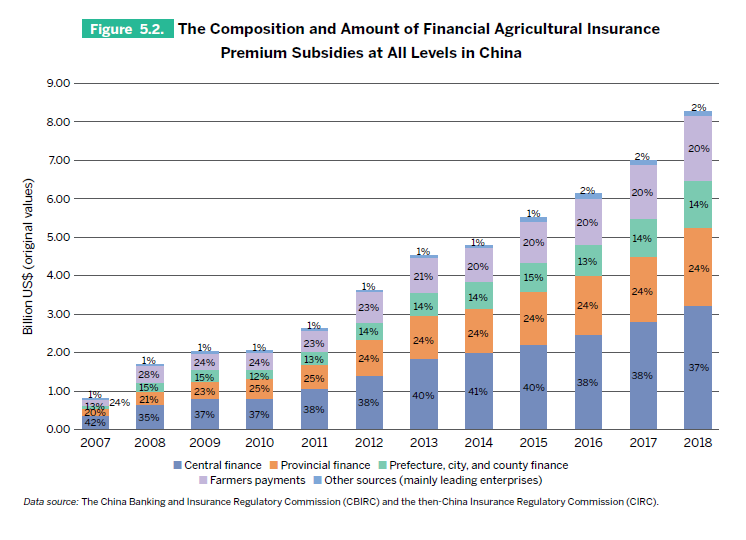 China’s agricultural insurance has developed a comprehensive product system. Main products include insurance for subsistence grain and oil crops, basic female livestock, and public and commercial forest; this is supplemented by insurance for special local agricultural products. Indemnity-based products have dominated China’s agricultural insurance program (Ye et al. 2020); in addition, weather- index and price index insurances are some of the most innovative types. Other agriculture-related  insurances are an extension of the market. Insured varieties cover major cereal crops, livestock and poultry, cash crops, forests, and crops with local characteristics.

By 2019, there were 16 agricultural products endorsed in the list of central finance subsidies, and 270 different types of insurance products covering crops, livestock, forest, and aquaculture.

China’s agricultural insurance has gradually covered drought, plant diseases, and insect pests, and it now approaches nearly all risk protection including damage from natural disasters (rainstorms, floods, waterlogging, droughts, typhoons, hail, frost, and so on), various kinds of disease and illness, accidents, and governmentordered slaughter—for instance, livestock slaughter for epidemic  prevention. Protection for the market and price risk is also on the way: a 2019 instruction issued by the Ministry of Finance, together with other three authorities, is encouraging the development of price-index insurance and revenue insurance. 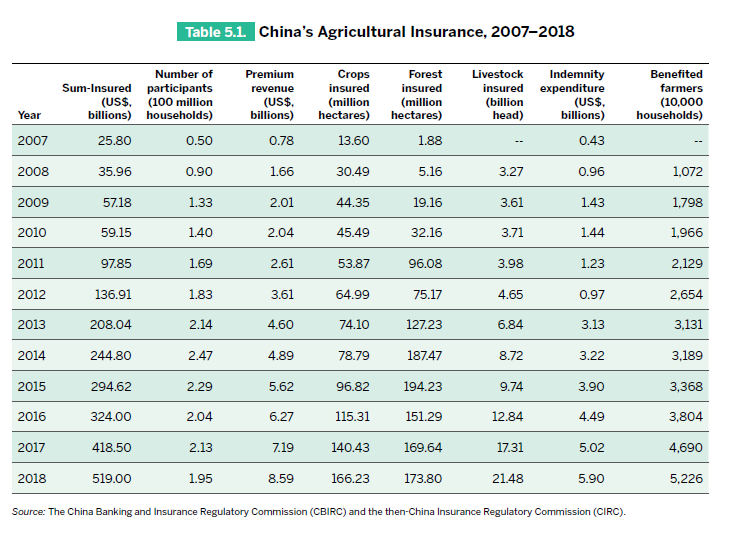 China’s agricultural insurance started with a strategy of “low liability but wide participation” (Ye et al. 2017) by providing limited sum insured and wide coverage of protection to farmers. China’s  insurance program has continued to provide heavy subsidies for subsistence agricultural products, but  also offered high liability and low-subsidy plans for cash crops, adapting to diversified needs from producers. In the past years, it has gradually raised the sum insured from purely replacement cost to including labor costs (Figure 5.3). Liability is expected to rise further according to the 2019 instruction from the Ministry of Finance, which has directly called for promoting the growth of the sum insured.

While the development of agricultural insurance in China has undoubtedly made major progress since the mid-2000s, the sector still faces considerable challenges that must be addressed if it is to reach its full potential.

• Lack of critical data. There remain gaps in fundamental data with respect to the insured (e.g., georeferenced farmland, livestock, and forest). Without precise data on the insured, it is difficult to link the farm indemnity written in a contract to georeferenced farm plots, leading to confusion and even  chaos in loss adjustment. The lack of historical yield or loss data has hampered quantitative risk assessment and corresponding risk-based premium rating, and the premium rates are still  province-based, ignoring the huge spatial difference in production risks. These data are either simply absent  e.g., farm-level yield data), or they lack viable protocols or mechanisms to share between government agencies and the industry.

• Underdeveloped technique. Most operations still rely heavily on manual computations, which can lead to great uncertainty. For instance, loss adjustment results have been mostly based on the expertise of agricultural technicians, and the final results are subjected to the negotiation between the policyholder and the insurer. Nationwide quantitative risk assessment and risk-based premium maps are still absent (Zhang et al. 2015). Agricultural nsurers still concentrate on  premium revenue while associated risk is largely ignored. There has been a rise in the use of information technology in agricultural insurance. The use of personal digital assistants (PDAs) for georeferenced positioning of the insured during underwriting, and drone-based remote sensing and rapid loss-assessment are a few examples. The 2019 instruction by the Ministry of Finance also calls for compiling the first-generation national agricultural production risk maps and riskbased premium rating results.

• Farmers’ awareness. As is typical in a developing agricultural sector, Chinese producers have limited experience in using insurance. The development of the  agricultural insurance market has entailed an extensive learning-by-doing process in which producers get to know insurance and learn to use insurance via deep involvement in the operational cycle, including paying the premium, witnessing the loss-adjustment procedure, and receiving indemnity in person (Ye et al. 2016). However, this process poses some problems. In some regions, local insurers work only with the representatives of the group policy, most likely village heads, when collecting premium and paying indemnity, because it s very costly to face tens of thousands of farming households in one county directly. In some counties, local governments are providing enough subsidy to allow producers to join the program for free, which saves a lot of administrative costs. For instance, the premium for paddy in Hunan Province was only 4 yuan per mu (1/15 hectare), and the cost incurred in collecting the premium could be several fold more than that in far-flung villages.