Five Reasons why Haiti Should Invest in Resilient Cities

Over the past 15 years, Haiti has experienced a rapid urbanization and the number of urban dwellers has doubled from 3 million to 6 million people. Haiti is now the third most urbanized country in Latin America and the Caribbean, after Trinidad and Tobago, and Mexico. Each year more than 133,000 Haitians move to cities.

What does this mean for the future of urban dwellers? And how best can cities respond to growing demands for services, jobs, and accessibility? These are some of the questions the Haitian government and the representatives of many other countries and cities will be asking during the World Urban Forum in Kuala Lumpur.

Many residents of Port-au-Prince struggle to find a place to live with affordable rent and running water, and many spend hours in traffic as they commute to their work place every day. Respondents in a World Bank twitter poll on @WBCaribbean identified resilient infrastructure and access to services as the two most pressing priorities in building resilient cities in Haiti.

Despite the challenges of rapid urbanization, extreme poverty levels have declined in Haiti and coverage of some services in cities has improved. Major cities are now all connected to the main road network, and access to micro credits has improved. 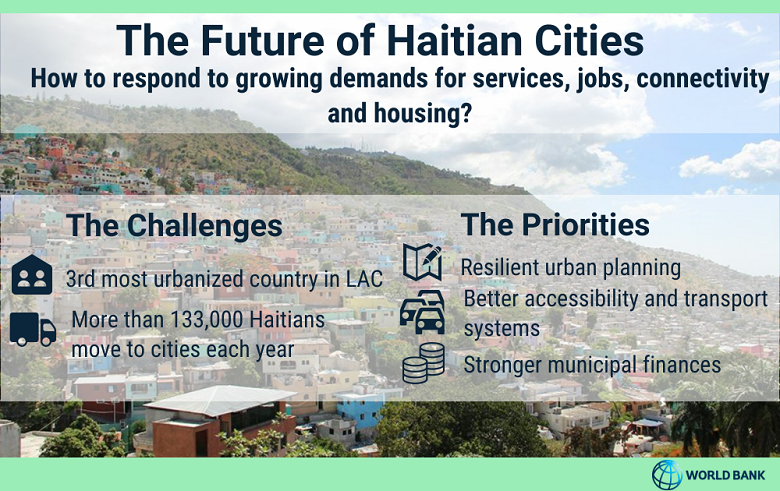 Made possible with the support of the Global Facility for Disaster Reduction and Recovery (GFDRR) and other partners, a new report, “Haitian Cities: Action for today with an eye on tomorrow," highlights five challenges and opportunities to build resilient cities in Haiti:

1. Sixty-four percent of Haitians live in cities and the number of urban dwellers could surge from 6 million to 11 million people by 2050: Such rapid urbanization comes with growing demands for infrastructure, services and jobs, but most importantly it also brings economic opportunities. This is particularly striking in the streets of Port-au-Prince, which is bustling with people, small street vendors, telecom shops and colorful tap-taps – painted vans used as public transports. To seize these opportunities, the report calls for more resilient urban planning to close the gap in infrastructure, services and to prepare for future urban growth.

2. Access to basic services has improved, particularly in urban areas, but more needs to be done to respond to fast growing needs: While residents in the capital of Port-au-Prince or the second largest city of Cap Haitian have better access to schools, health services and electricity, two thirds of urban residents lack improved sanitation and the collection rate of solid waste is very low. Strengthening municipal financing will allow local governments to make the right investments and engage citizens in decision making.

3. Accessibility and affordable transport is key to access economic opportunities: 60 % of households are not using motorized transport. Tap Taps are the most widely used form of public transport, yet some of the most vulnerable can spend up to 73 percent of their total income in Tap Tap fares just by riding in these collective vans twice a day during the week. Investing in roads and improving efficiency and affordability of public transport, as well as strengthening urban land management, will be key to reducing the time people spend sitting in traffic and in improving the accessibility to jobs and markets.

4. Costly natural disasters have undermined the benefits of the urbanization process: More than 96 percent of Haitians are at risk of two or more natural hazards. High concentrations of construction are found in seismic areas, and half are built in flood prone areas. Following the 2010 earth­quake, Haiti developed disaster risk management information and planning tools, such as multi-hazard risk assessments, the mapping of seismic zones and exposed assets. A first open data platform - Haitidata.org -  was also launched to better allocate public resources in post-disaster situations.

5. A stronger system of municipal finance is needed to close the infrastructure and service gap and accommodate the growing urban population: Only 0.6 percent of GDP is currently spent by communes (municipalities). As cities expand in size and population, the challenge is to finance sustainable and inclusive urban development growth.