The Development of Catastrophe Insurance in China: An Exploration

In the aftermath of the 2008 Wenchuan Earthquake, the Chinese government recognized the importance of catastrophe insurance in promoting rapid rehabilitation and recovery following a disaster. China has since made significant progress in establishing a catastrophe insurance indemnity mechanism that allows for local innovations based on local characteristics. An excerpt from our knowledge note, Learning from Experience: Insights from China’s Progress in Disaster Risk Management. Read the full chapter here.

China’s system of compensation for catastrophic loss has relied heavily on government relief and public donations; insurance has played a rather weak role. According to Chinese government figures, insurance claims in China have historically accounted for less than 1 percent of direct economic losses in major large-scale disasters.

Since the 2008 Wenchuan Earthquake, the Chinese government has recognized the importance of catastrophe insurance in ensuring rapid rehabilitation and recovery in the aftermath of a disaster. China is a large country with a vast territory, and its disaster risk profile is characterized by significant regional variation. In establishing a catastrophe insurance protection mechanism, the Chinese government has accordingly put forward a national guideline that allows for local innovations and pilots based on local characteristics, with the goal of developing a system that fully addresses risk protection needs across the country.

Under this guideline, the country has laid the foundations for a diversified catastrophe insurance product system, which consists of both national standards and localized policies, single-peril (earthquake) versus multiple-peril, and indemnity-based and index-based types. Besides, as the public in China still has a relatively low awareness and acceptance of natural disaster nsurance (Wang et al. 2012), in some local pilots—including in Ningbo, Shenzhen, and Guangdong—local governments are purchasing insurance on behalf of all the citizens. Insurance indemnity covers many areas that were previously handled by government relief.

China’s catastrophe insurance system is still in its pilot stage and there are many challenges ahead. It is worth noting that, despite the progress that has been made in expanding the reach of catastrophe insurance over the past decade, overall coverage is still very limited. Moreover, the pilot areas are mostly in  economically developed areas. Most provinces in the central and western regions, as well as most rural areas, still have no coverage.

Certain types of insurance—flood insurance  and typhoon insurance for example—as well as supporting techniques such as catastrophe risk models, are still underdeveloped. 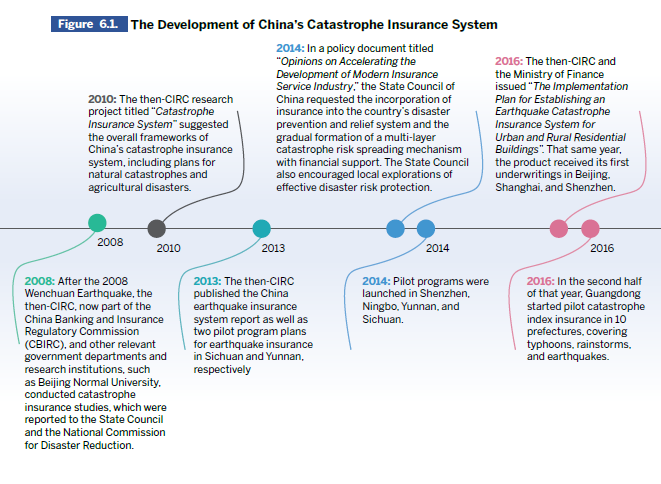 • Sichuan. On September 12, 2018, an earthquake of magnitude 5.3 occurred in Hanzhong City, Shannxi Province, a province neighboring the north of Sichuan. People’s Property and Casualty Insurance Company of China (PICC P&C), Guanyuan Branch, paid a total of 25,000 yuan for earthquake house damage. This was the first indemnity case of the pilot program. On June 17, 2019, a magnitude 6 earthquake hit Changning County, Sichuan Province, claiming the lives of 12 people and causing the relocation of over 4,000 people. In total,  more than 10,000 houses were damaged. Two days after the quake, the insurance industry received 65 claims with an estimated total  indemnity of 596,100 yuan.

• Yunnan. On March 27, 2017, three consecutive earthquakes with  magnitudes of 4.7, 5.1, and 4.3 struck Yangbi County, Dali Prefecture. The index-based earthquake insurance was triggered.  Indemnity was computed and paid within 32 hours after the quake, for a total amount of 28 million yuan.

• Ningbo. Since 2015, Ningbo’s program has had six mass indemnities triggered by catastrophes. In August 2019, Super Typhoon Lekima it nine provinces on China’s eastern coast. For the city of Ningbo, total direct economic loss was estimated to be 1.97 billion yuan. By August 12, insurance companies had received reports of more than 53,000 cases with total claims up to 460 million yuan. By August 15, total claims had reached 634 million yuan, and the estimated final indemnity could be over 700 million yuan.

• Shenzhen. On April 11, 2019, a rainstorm struck Shenzhen, causing a flash food and claiming nine lives. Shenzhen catastrophe insurance paid a final indemnity of 250,000 yuan for each dead or missing person, and an extra 20,000 yuan for the relocation of family members.

• Guangdong. On August 23, 2017, Typhoon Hato landed in Zhuhai. According to the formal report from Guangdong Province’s climate center, the wind speed of Hato exceeded the threshold of predefined index for Yangjiang City and Yunfu City; nsurance indemnity was triggered. Within half a day, 1.2 million and 10 million yuan were paid to bank accounts specified by Yangjiang and Yunfu city governments respectively. In 2018, Super Typhoon Mangkhut triggered insurance indemnity for Yangjiang and Maoming. Within 24 hours, insurance companies paid 5.5 million and 20 million yuan to the departments of finance of Yangjiang and Maoming cities, according to index calculation, respectively.