The Counterpart Support Program for the Wenchuan Earthquake Recovery: Lessons and Reflections

In response to the devastation of the Wenchuan earthquake in 2008, the Chinese government established a counterpart support program for post- disaster recovery and reconstruction. The program designated 19 provinces and municipalities of provincial status to support some of the most severely affected counties and cities. An excerpt from our knowledge note, Learning from Experience: Insights from China’s Progress in Disaster Risk Management. Read the full chapter here.

On May 12, 2008, a magnitude 8.0 earthquake occurred in Wenchuan, Sichuan Province. The casualties caused by the disaster reached 87,150 and more than 20 million people were affected.

Critical infrastructure, such as houses, transportation infrastructure,  schools, and hospitals were seriously damaged. The direct economic  losses caused by this disaster was more than US$121 billion.* In  response to the devastation, the Chinese government established a counterpart support program for post-disaster recovery and reconstruction efforts, with the consent of the Party Central Committee and and the State Council of China.

Under the theme of “one province for one severely affected county, with the strength of the whole country, to accelerate the recovery and reconstruction,” the program designated 19 provinces and municipalities of provincial status to support the severely affected counties and cities in Sichuan, Gansu, and Shaanxi Provinces, in a unified fashion, with no less than 1 percent of their fiscal income for three consecutive years. The key objectives and components of the program include but are not limited to:

The State Council took the lead in developing policy making around the counterpart support program, in line with the top-down approach that was adopted by the Chinese government in the reconstruction following the Wenchuan Earthquake. In keeping with the guidance document issued by the State Council, the affected provinces and counties made reconstruction plans step by step. These have laid the foundation for the counterpart support provided. 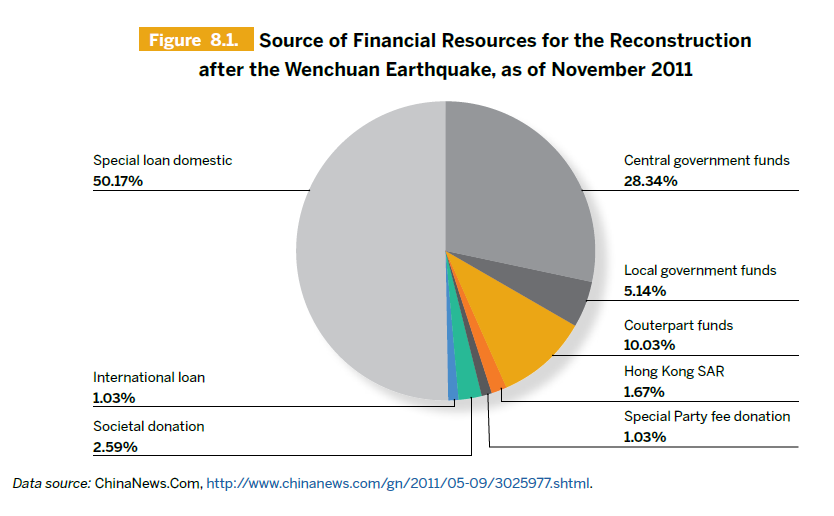 The counterpart support program ultimately enabled the affected  localities to glean lessons and insights from the experiences of other localities in China. In particular, the affected provinces and counties were better able to develop a “people-centered” reconstruction plan and ensure that the reconstruction of housing, schools, and hospitals of both urban and rural residents were adequately prioritized.

Moreover, countersupport program funds helped cover the staggering costs of the reconstruction, ultimately covering a tenth of these costs, which totaled nearly US$143 billion. By comparison, international agencies (e.g., the World Bank) provided just over 1 percent of the funds. Just over half of the funding came from reconstruction lending  provided by domestic financial agencies (Figure 8.1).

Notwithstanding these benefits from the counterpart support, several key challenges also emerged over the course of the implementation of
the program.

The supporting province/municipality and the recipient county paired up are not equal at the administrative level. The administrative level of the provider, in this case, is higher than that of the recipient. As a result, the priorities of the provider, a province, and the recipient, a county, did not always align well. Under the supervision and assessment of the provincial vertical leadership, the supporting province/municipality will naturally pay special attention to the assessment and strive to complete the reconstruction work within the shortest time and limited scope, while the long-term development of the disaster area and the specific  interests of the local victims could not be fully addressed. For example, the rapid reconstruction caused fragmentation of  original neighborhoods in some areas, which hindered long-term community recovery. 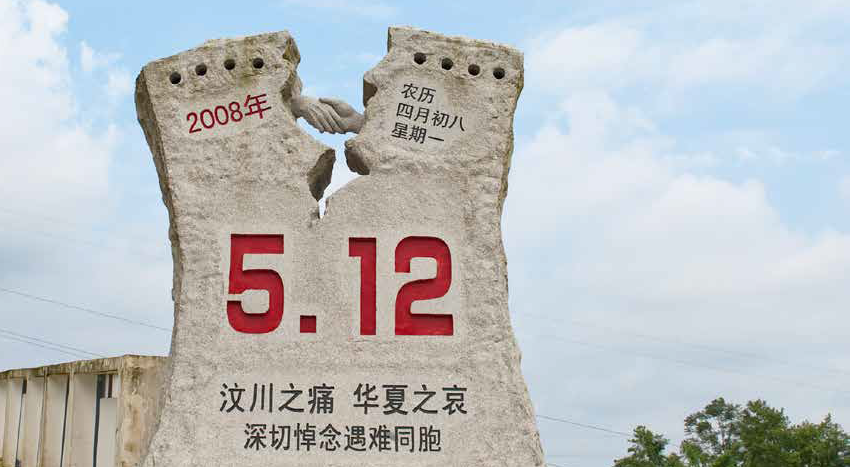 In Focus: Results and Highlights from the Wenchuan Earthquake Recovery

Wenchuan Earthquake Recovery Project. The Wenchuan Earthquake Recovery Project (WERP), supported by the World Bank and implemented by the Chinese government, played a key role in restoring and enhancing basic infrastructure, as well as health and education services, in 27 severely affected counties in Sichuan and Gansu, the two provinces hardest hit by the earthquake. Adopting the principles of building back better, WERP built or renovated 300 roads, constructed and equipped 67 health facilities, and rehabilitated and constructed nine  wastewater treatment plants. The project also pioneered an innovative model in post-disaster reconstruction, integrating restoration and reconstruction with revitalization and development, while considering the local context.

Recovery and reconstruction policies. After the disaster, the State Council and Sichuan Province successively issued 105 policies to support the recovery and reconstruction of the disaster area, covering finance, taxes, land, industry, assistance, and other aspects; these policies played a crucial role in the post-disaster reconstruction. Meanwhile, enterprises, social organizations, and individuals from all regions were encouraged to invest in the disaster areas and build operational infrastructure. Financial institutions were also encouraged to provide support to counterpart enterprises.

Relocation and rehabilitation. In the first three months after the earthquake, the State Council provided 500 grams of food and US$1.5 (10 yuan) of subsidies to each affected person in the disaster area on a daily basis, in addition to a US$710 (5,000 yuan) consolation fee to each victim’s family. In total, 15.1 million people were transferred and resettled. In response to the call of the state, all parts of the country formed a pair with the local disaster area, drawing extensively on the active participation of the public.

Building back better. With the goal of building back better, the technical level and disaster prevention level of houses, hospitals, schools, and major roads have been greatly improved. More than 2,100 kilometers of level II and higher-level roads were built, which is around 50 percent more than that before the earthquake. Almost all the towns and villages in Sichuan, Gansu, and Shaanxi are covered by the newly built road network.

In Qingchuan, Pingwu, Beichuan, Maoxian, Wenchuan, Songpan, Jiuzhaigou, and other mountainous areas, at least three alternative routes were built to ensure network redundancy. Driving conditions have been significantly improved. According to the statistics of the Department of Transportation of Sichuan Province, highway ravel time has been shortened by 30 percent and its capacity increased by 50 percent.