In the heart of the Afagnan district, in southern Togo, is the village of Edoh-Wowuikopé, whose population is estimated at 450 inhabitants, almost all of which rely on agriculture to earn a living. Located at the bottom of the Mono River basin, the village is prone to severe recurrent flooding during the rainy season which has had devastating effects on the crops and mud-brick homes of Edoh-Wowuikopé’s people. The situation became so acute that whole communities began moving away to drier zones, resulting in a free fall in productivity and massive displacement of local populations.

But a new hope has blossomed in Edoh-Wowuikopé’s community. While it has much to do with the will and determination of the people, it was also made possible thanks to financial support from the Integrated Disaster and Land Management Project (PGICT) which contributed 32 million CFAF ($60,000) to the flood prevention infrastructure. The PGICT, supported by the World Bank and the Global Facility for Disaster Reduction and Recovery (GFDRR), the FEM, LDFC, and TerrAfrica, has developed a participatory and inclusive approach which allowed communities to become development actors in their home communities. In Edoh-Wowuikopé, 246 people (among whom 66.26% are women) actively participated in the installation of the flood prevention works.

Edoh-Wowuikopé's vicious cycle of flooding, devastation, and poverty came to end this past April when communities came together to change the fate of their villages. A bold mobilization of men and women decided to tackle the problem instead of being a victim to it. Together, they went to work on building water retention mechanisms and related infrastructure that would enable the excess flood waters to drain from the surface and away from their homes and crops. Their sheer determination fueled a life changing initiative that will protect them and allow future generations to prosper in the coming years.

“They were the motor behind this initiative. They constituted a real local workforce that accelerated the construction of these infrastructures. Now, the environment is protected and the drained flood waters will be collected in the basin to serve as irrigation waters for crops in the off-season,” remarked Yao Alex Hoegnikou, Executive Director of OVAD-AP, a nongovernmental organization that supervised the population during the project implementation period. 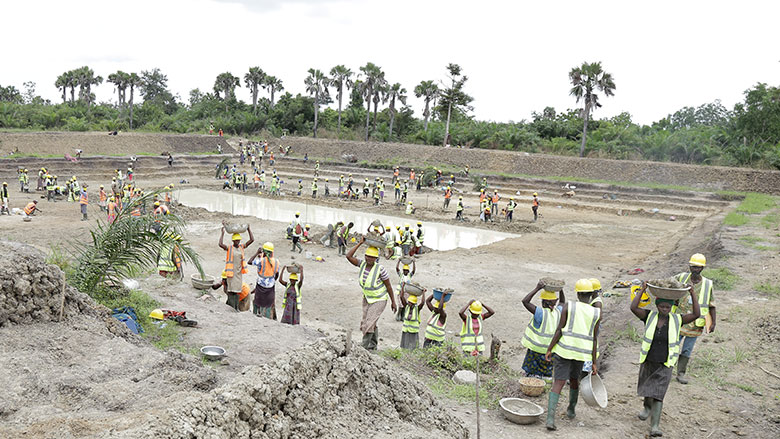 Furthermore, the high intensity labor jobs needed to build the water retention installation, a canal for water flow, zoning areas for horticulture, a road to the village, and culverts were also a way for inhabitants to boost their incomes. “Those who worked on different sites received 20, 000 CFAF every fifteen days. This money helped us meet the needs of our households and save a small amount to engage in new activities around the water reservoir, especially horticulture,” said Rebecca Amezian, a resident of.

Rainy seasons are no longer a source of fear, but rather a source of wealth, as villagers are now able to capture and make use of this precious resource. With flooding becoming a thing of the past, those who were displaced have returned to their homes are now taking part in income generating activities that boost the local economy. Yawovi Zomatsi, Edoh-Wowuikopé’s village chief, enthusiastically expressed the economic outlook for the village, noting that:

“With the floods but a distant memory, we are now focused on our farming activities. Previously, women worked on other people’s farms, however now they can farm on their own fields near their homes. We have also planned to start fish farming, an economic activity we have always wanted to develop in the village.”

At a national level, a total of 85 community sub-projects such as the one in Edoh-Wowuikopé have been implemented in targeted areas to help reduced disaster risks and work towards ending poverty.