Livelihoods for Georgia’s agricultural workers, accounting for more than half its labor force of about 2 million, are threatened by growing climate risk. (World Bank)

The effects of climate change are already increasingly visible around the globe. Images of the devastating hurricanes in the Caribbean are fresh on the minds of participants in the 23rd Conference of Parties (COP23), underway this month in Bonn, Germany, where leaders have gathered to accelerate the transformation to sustainable, resilient, and climate-smart development.

Climate resilience efforts can’t come fast enough for countries like Georgia, which is seeing increasing temperature and rainfall averages. This is bad news for nearly half of employed adults in Georgia, who work in the agricultural sector – as it is highly sensitive to severe disruptions from changing weather patterns.

In addition to this major socioeconomic risk, communities must also deal with more frequent and severe instances of floods, mudflows, landslides, avalanches, and droughts, among other hazards. For example, the floods of June 2015 in Tbilisi  caused over $20 million in damages, claimed 20 lives, and damaged around 40 roads, the properties of 67 families, and several urban infrastructure and communications systems. More recently, the devastating Borjomi fire in August 2017 affected at least 646 ha of land, in a region with popular tourism resorts. 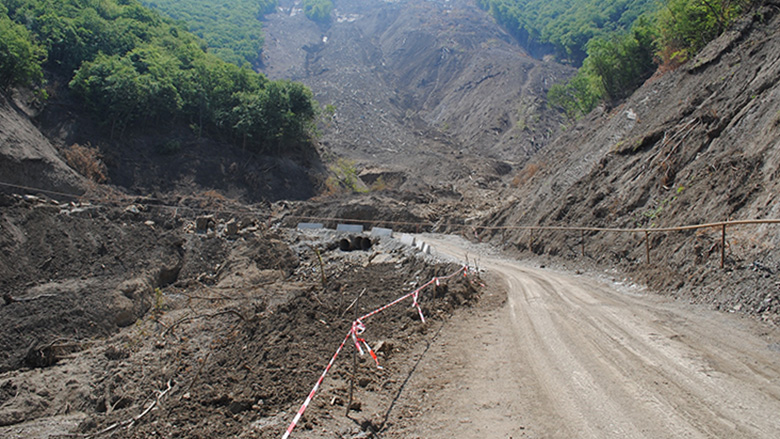 Landslides like this one were common in the aftermath of the 2015 Tbilisi floods, which claimed 20 lives and caused in excess of $20 million in damages. (Wikipedia Commons)

Disasters like these can endanger development gains, especially among the most vulnerable communities. While Georgia has made significant strides in alleviating poverty in recent years, 70% of the territory of the country has also experienced natural hazards of hydro-meteorological and geological origin from 1968 to 2009; causing economic losses exceeded 14 billion USD. As such, the country’s socioeconomic progress could be severely disrupted if another major earthquake or an extreme weather event were to take place.

To help countries like Georgia protect development gains by better managing climate and disaster risk, the World Bank and the Global Facility for Disaster Reduction and Recovery (GFDRR) work with governments to develop and implement comprehensive financial protection strategies that can ensure rapid and effective recovery, as well as the protection of key development activities, in the wake of a disaster.

Strengthening financial planning for disasters at all levels

To make disaster risk management more effective across local and national levels, key decision makers should be brought together to uncover institutional, legal, and financial barriers – as well as opportunities – to scale up resilience. Stakeholder consultations can create a collaborative space for interaction among line ministries that otherwise have few opportunities for collective problem-solving and knowledge-sharing.

As an economically stable middle-income country, Georgia is eligible for a contingency development policy loan from the World Bank, such as a Disaster Risk Management Policy Loan with a Catastrophe-Deferred Drawdown Option (CAT-DDO). This type of loan would make resources available immediately after a disaster to serve as bridge financing until other domestic funds can be reallocated or international aid is received.

This approach could also serve as an incentive to invest in targeted risk assessment and risk reduction activities (such as retrofitting) to reduce losses and lower the cost of insurance, and help catalyze adoption and enforcement of crucial building codes that can maximize resilience within the built environment.

For example, the World Bank is currently working with the government of Georgia to better align with and implement Eurocode 8, which harmonizes the design and construction of buildings and civil engineering works in seismic regions.

Comprehensive financial protection is not possible without the accessibility, management, and sharing of disaster risk information. One solution could be a versatile geospatial platform, using an open source Geonode - a web-based application for developing geospatial information systems (GIS) and online spatial data platform -  ensuring that data and resources are available to the organizations and stakeholders for making risk-informed decisions.

For Georgia, and many other countries around the world, layered resilience-building strategies like these will become more essential in preserving hard won development gains from the growing risks of a changing climate, in addition to growing populations and rapid urbanization.