Building Regulations for Resilience in India

India recurringly suffers the harmful consequences of disasters such as flooding, landslides and earthquakes, affecting the lives of millions exposed to risk. Vulnerable populations, particularly the urban poor, suffer a high degree of human and economic loss due to disasters, which can be further exacerbated by an unsafe built environment. Experience shows that building collapse, fires, and other recurrent, small-scale events also have destructive impacts, which augment in absence of effective resilient measures.

It is clear that enforcing robust building regulations is a priority across the country. In this context, the authorities in the States of Uttarakhand and Andhra Pradesh, and the Union Territories of Jammu & Kashmir and Ladakh, have undertaken this challenge by reviewing their current building regulatory capacity, examining the opportunities and gaps in the scope and implementation mechanism of relevant bylaws.

The reviews have been done as part of the Government-led post-disaster reconstruction projects financed by the World Bank, such as the Uttarakhand Disaster Recovery Project (P146653), the Andhra Pradesh Disaster Recovery Project (P154847), and the Jhelum and Tawi Flood Recovery Project in the Union Territory Jammu and Kashmir (P154990). The reviews assess current level of building regulatory capacity and setting up priority actions for further improvements, as outlined in the Building Regulatory Capacity Assessment (BRCA) tool developed by the World Bank’s Building Regulation for Resilience (BRR) Program. 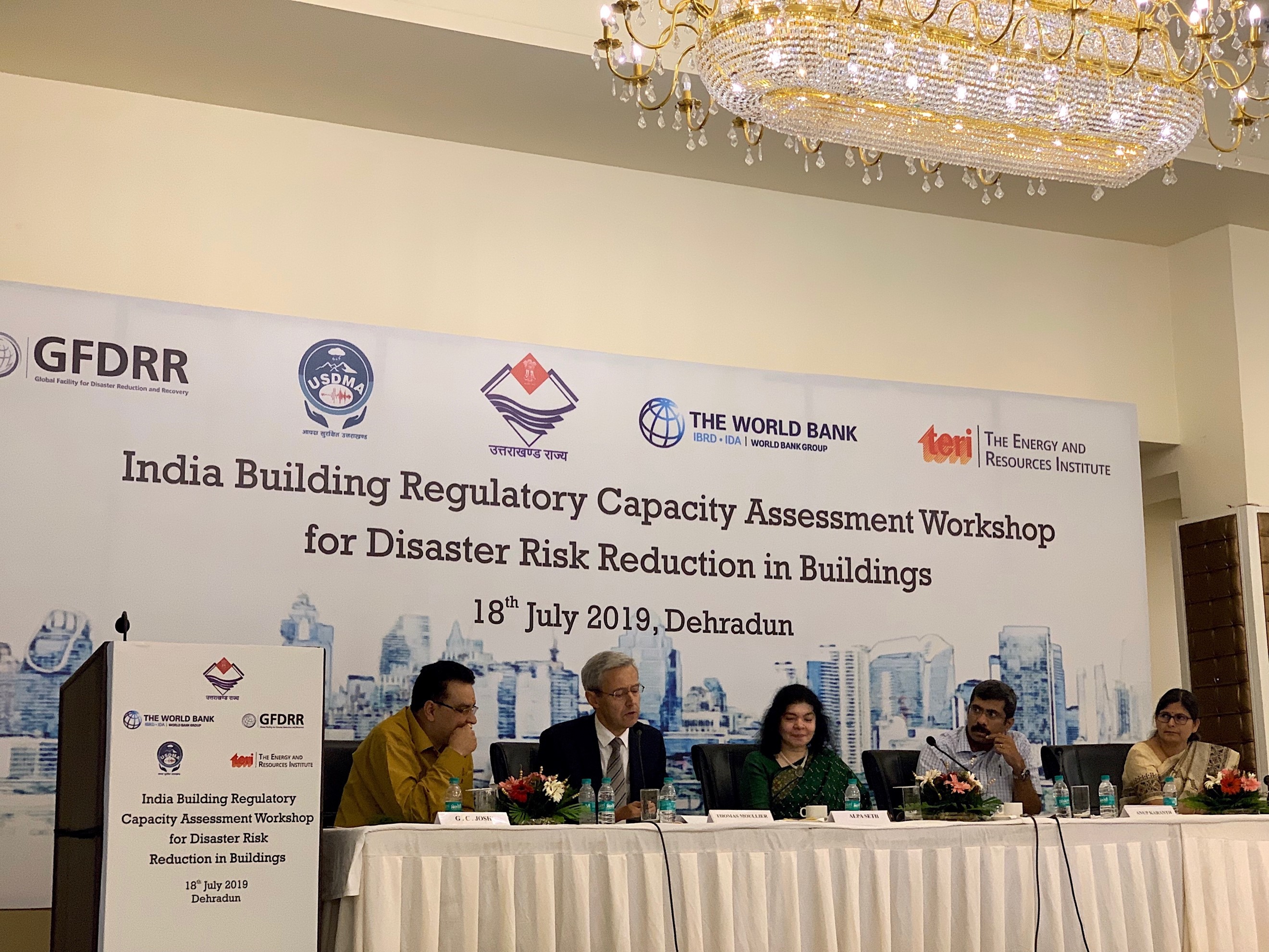 The overall objective of the workshop was to share the findings from the Building Regulatory Capacity Assessments (BRCAs) carried out in the States and Union Territories, and exchange views on strategies to translate the assessments’ recommendations into tangible actions. The BRCAs include an in-depth review of local regulatory frameworks, responsibilities of stakeholders and coordination among stakeholder groups, as well as effective implementation mechanisms.

“Our biggest challenge is compliance. It is urgent that we develop efficient ways to ensure a strict compliance of building bylaws because this is the only way to ensure the safety and security of the community.” -- Amit Singh Negi, Secretary from the Uttarakhand State Disaster Management Authority.

The workshop was an opportunity to share the BRCAs’ findings by State and Union Territory authorities and to exchange views on the recommendations and prioritization approach. With lively participation and discussion, the presentations brought together reflections from a global and regional perspective, highlighting the shared challenges of construction and effective regulation in disaster-prone environments.

Some of the recommendations that resulted from the workshop are below:

Uttarakhand is one of the most disaster-prone States in India; the damage to infrastructure and loss of livelihoods is a constant challenge for recovery, rehabilitation and reconstruction in the region. The state has a fairly good understanding of the risk as USDMA recently concluded a study on state wide risk assessment and creation of a Disaster Risk database. The improvement of building regulations remains a priority for the State, which has adapted its local legislation to include Acts and bylaws that have effectively laid a base framework for building code compliance.

Despite these efforts, implementation of bylaw is a major challenge in need of coordinated actions by local authorities. This requires both technical efficiency and institutional transformation, advocating for a comprehensive approach that streamlines and adapts existing standards to local context, while supporting administrative processes that minimize gaps and mandate overlaps.

Furthermore, a successful implementation of bylaw can strengthen from technical information or processes that retrofit and update existing regulations. This includes, for example, incorporating local hazard maps, implementing structural standards as part of state bylaw, and improving the digital platforms for permitting processes at city and state level.

State authorities have made concerted efforts in recent years to strengthen both disaster risk reduction and coastal zone regulation. The recent urban masterplans prepared for Vijayawada and Vishakhapatnam, for example, considered both disaster risk principles and coastal zone regulations in their design. In addition, attempts are being made to address heritage-related concerns, looking at ways in which old building stock could be adapted for resilience.

Other priority areas include developing more efficient procedure systems: investing on digital technologies to improve the permit approval process and streamlining revision steps by technical personnel. This process of modernisation will help improve the efficiency of the approvals, reduce human errors and enhance transparency of the process. On the other hand, it demands qualified, specialized staff that is well-informed on standards and skilled on emerging technologies. Authorities acknowledged the shortage of staff resources and the difficulties of levelling technological knowledge across different departments and units.

As part of the initiatives to enhance the capacity and scope of building officials, the state aims to create guidelines for eleven different technical profiles (Licenced Technical Personnel) with specific professional requirements. Any long-term capacity-building initiative will require a sustained commitment to provide adequate training opportunities to different professionals, with different focus (fire, accessibility, inspection, etc.), as well as finding qualified, proactive staff.

The presentation contextualized the constraints faced by hill Union Territories such as Jammu & Kashmir and Ladakh, which are exposed to multiple hazards while having a low development index due to the region’s fragile status. While most of the attention related to disasters is placed on large-scale events such as earthquakes, disaster risk planning has often neglected chronic hazards like fire, which occur with high frequency and high intensity. The region’s cold weather and difficult access routes have accentuated the risk and impact of fire events.

Innovation is required to develop safer cities, ensuring that the built environment left for future generations is sustainable on the long-term. In this sense, regulatory frameworks must consider not only technical matters, but also social and cultural aspects of development, including integrated open spaces, intangible needs of the people, clearer land-use restrictions, occupancy bylaws, and a sensible application of standards.

Achieving a comprehensive, innovative regulatory framework depends on political will, accountability and transparency. Previous examples show that regulations have not been enough to prevent tragedies such as fire, and that there are repeated cases of inconsistent building processes, where submitted drawings are changed during construction without approval. A transformative change relies on respecting the existing building bylaws and ensuring that the built environment is safe and resilient for the future. 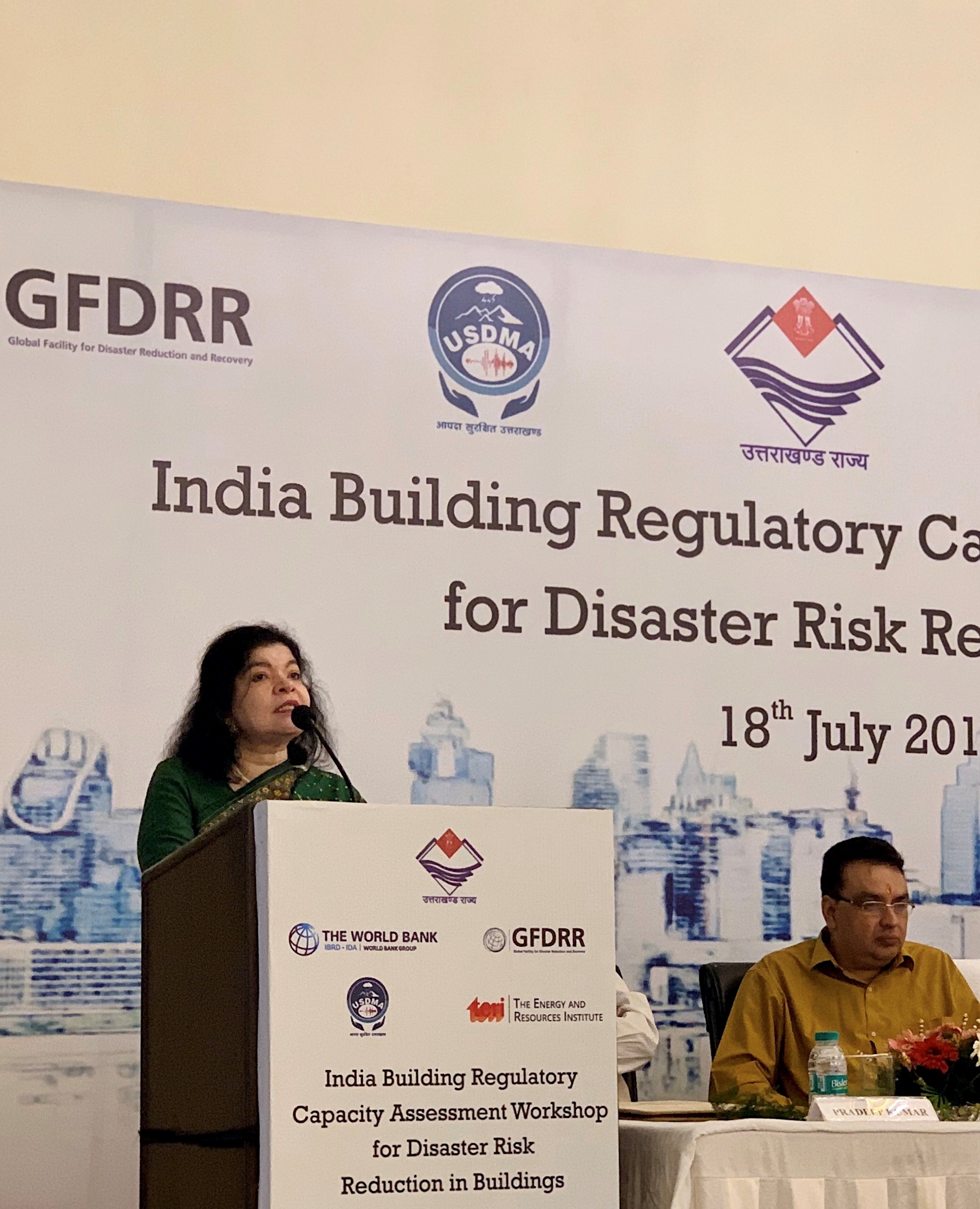 The Way Forward for Effective Implementation

This workshop laid the ground for follow-up through state-level consultations, latching onto the current political will to build consensus and explore the applicability of the prioritized recommendations. These efforts will support the development of action-plans designed to deliver safer and more resilient built environments which, ideally, may be followed by other States and Union Territories of India.

Effective transformation, however, is a collective endeavor. As highlighted by the presentation by TERI, there is limited awareness from the construction sector on approval processes and governmental initiatives that could benefit the industry. Similarly, builders and contractors often lack the skills and knowledge to comply with the existing regulatory demands, which leads to widespread informal practices. With the empowerment of those responsible for code implementation, together with an improved, horizontal communication between regulators and communities is indispensable. Through proactive and innovative communication campaigns, robust risk financing strategies and political support, there are higher opportunities to develop context-appropriate built environment legislation.