Courtyard of the Kalon Mosque in Bukhara, Uzbekistan. (Photo by Jean-Pierre Dalbéra / CC BY 2.0)

Cities across Central Asia experienced catastrophic seismic shocks throughout the 20th century. For example, Tashkent – the most populated city in Central Asia today – was razed to the ground by a 7.5 magnitude earthquake in 1966, with over 300,000 people reportedly losing their homes. Turkmenistan’s capital city of Ashgabat was severely impacted by a 7.3 quake in 1948, with thousands of deaths reported. Dushanbe, the capital of Tajikistan, and Almaty, Kazakhstan’s largest city, also suffered major seismic events in 1907 and 1911, respectively.

Today, these cities are at the heart of the region's cultural dynamism and economic growth, along with many other cities and communities where people live under significant seismic risk. Here, severe droughts and extreme temperatures are also major regional challenges. In 2008, for example, an exceptionally cold winter created a humanitarian crisis in Tajikistan, affecting more than two million people.

Apart from these rare and devastating events, other disruptive hazards like floods, landslides, avalanches and mudflows also threaten the livelihoods and well-being of more than 70 million people throughout the region. Beyond their localized impacts, these more frequent hazards can also drain local and national budgets over time, damage economic development, and push vulnerable populations into poverty.

The impacts of natural disasters create significant fiscal challenges for governments in Central Asia. The World Bank estimates that the total annual damage from earthquakes in the Kyrgyz Republic amounts to about US$ 200 million, with US$ 60 million in damages from floods and US$ 2.6 million in damages from landslides. Moreover, approximately 25% of Central Asia’s population is employed in agriculture – which is one of the sectors most vulnerable to hydro-meteorological disasters such as flooding or drought.

From 2000-2001, a regional drought caused losses of more than US$ 800 million in terms of lost agricultural production in five countries in Central Asia and the Caucasus. In Tajikistan, these losses were equivalent to 4.8% of its GDP, and contributed to an increase in the country’s current account deficit.

Trade – another essential economic activity in Central Asia – is also routinely impacted by natural disasters. For instance, the main trade route (M41) running through the southern mountains of the region is affected by landslides, mudflows, rock falls, and avalanches each year, slowing or completely cutting off this vital artery. Climate change is exacerbating the impacts, and threatens Central Asia’s environmental stability, infrastructural integrity, and urban development. Such impacts often result in severe fiscal strain for governments in Central Asia.

Global warming affects villagers' way of life. The arid climate means that people must graze their sheep higher and higher in the mountains, where the grass is better than in the lowlands. (Photo by Marat Sayranbaev, Kyrgyz Republic)

In the Kyrgyz Republic, for example, the World Bank is supporting the newly established State Insurance Organization to develop a mandatory disaster insurance program scheme for private property. The preliminary results are promising: following an earthquake in Osh oblast in May 2017, more than 40 homeowners benefitted from payouts of 6,839,000 som (about US$ 100,000).

Moreover, a recently-approved investment project in Tajikistan includes the development of a strategic framework for post-disaster financing, to help the government improve financial planning for natural disasters. Additional regional resilience-building activities are under preparation throughout Central Asia, and will also include disaster risk financing elements. 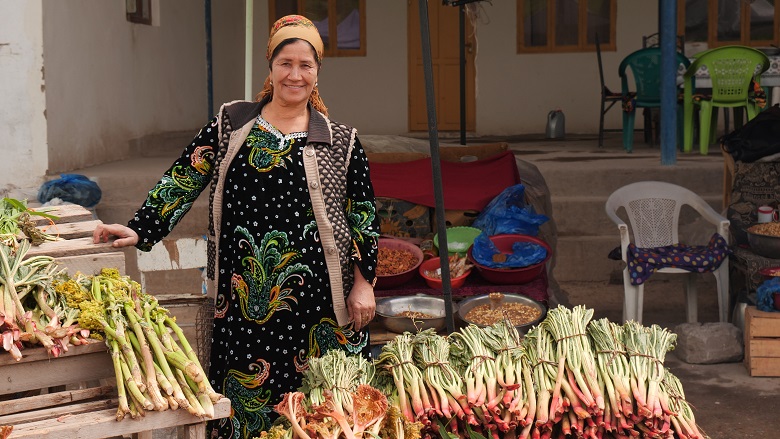 Tajik woman selling vegetables in Sughd Province of Northern Tajikistan. Agriculture is among the most risk-prone sectors in Central Asia’s economies. (Photo by Stuhlberger/Zoï Environment)

These disaster risk financing efforts across Central Asia build upon numerous global case studies, and take account of global best practices. To support the Enhancing Resilience in Kyrgyzstan project, for example, GFDRR and the World Bank facilitated a knowledge exchange exercise in June 2018 between Kyrgyz representatives and counterparts from Turkey and Romania.

This exercise highlighted important insights from mandatory disaster insurance programs implemented in recent years by the Turkish Catastrophe Insurance Pool (TCIP) and Romania’s Insurance Pool against Natural Disasters (PAID), which cover 48% and 20% of their populations, respectively. PAID has reached a solvency ratio of 206%.

Given the range and scale of natural hazards occurring in Central Asian countries, disaster risk financing is fast becoming a critical element for sustainable socioeconomic development. As such, it is critical to bring together a range of government and development partners to better understand the challenges and develop customized solutions. In partnership with regional organizations such as the Centre for Emergency Situations and Disaster Risk Reduction (CESDRR), GFDRR and the World Bank are working to ensure that cooperative efforts in disaster risk financing continue well into the future.