This report highlights the results achieved by the Global Facility for Disaster Reduction and Recovery (GFDRR) during fiscal year 2016 (FY16). It provides an overview of GFDRR’s grant-making as implemented through the Country Program, and how these activities support the Sendai Framework for Disaster Risk Reduction, the Paris Agreement on Climate Change, and the Sustainable Development Goals. It highlights progress under GFDRR’s eight Thematic Initiatives, and cross-cutting priorities such as women empowerment and resilience to climate change, as well as support to international cooperation and building knowledge and capacity for disaster risk management (DRM). The report also presents details of GFDRR’s financial performance during the year.

GFDRR supports the implementation of the Sendai Framework for Disaster Risk Reduction, and its goal of “substantial reduction of disaster risk and losses in lives, livelihoods, and health and in the economic, physical, social, cultural and environmental assets of persons, businesses, communities, and countries.” To achieve this, GFDRR works with partners to: (i) mainstream disaster risk management and climate change adaptation in development strategies and investment programs; and (ii) improve the timeliness and quality of recovery following a disaster.

Financing Windows: GFDRR finances demand-driven technical assistance through a number of implementing partners. Financing Windows include a multi-donor trust fund (MDTF) funded by all donor members of GFDRR and two special programs financed by the European Union and Japan.

The Country Program: GFDRR implements the majority of its program through the World Bank in partnership with national, regional, and other international agencies. Activities financed must: (i) respond to a request from a vulnerable country; (ii) contribute to the goal of the Sendai Framework; (iii) ensure technical soundness in their design; and / or (iv) demonstrate high potential for impact either because they inform development financing or support policy change. 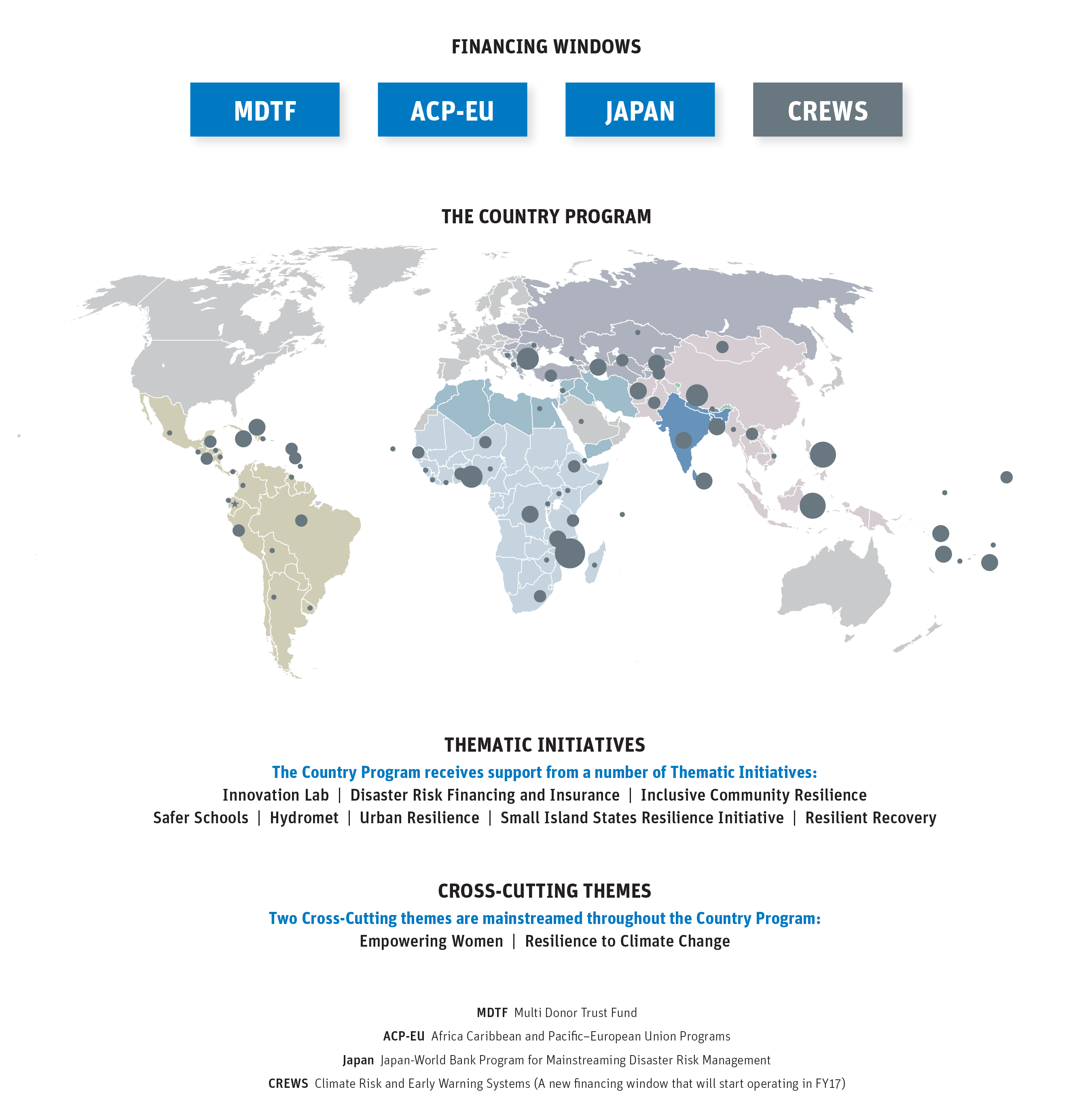 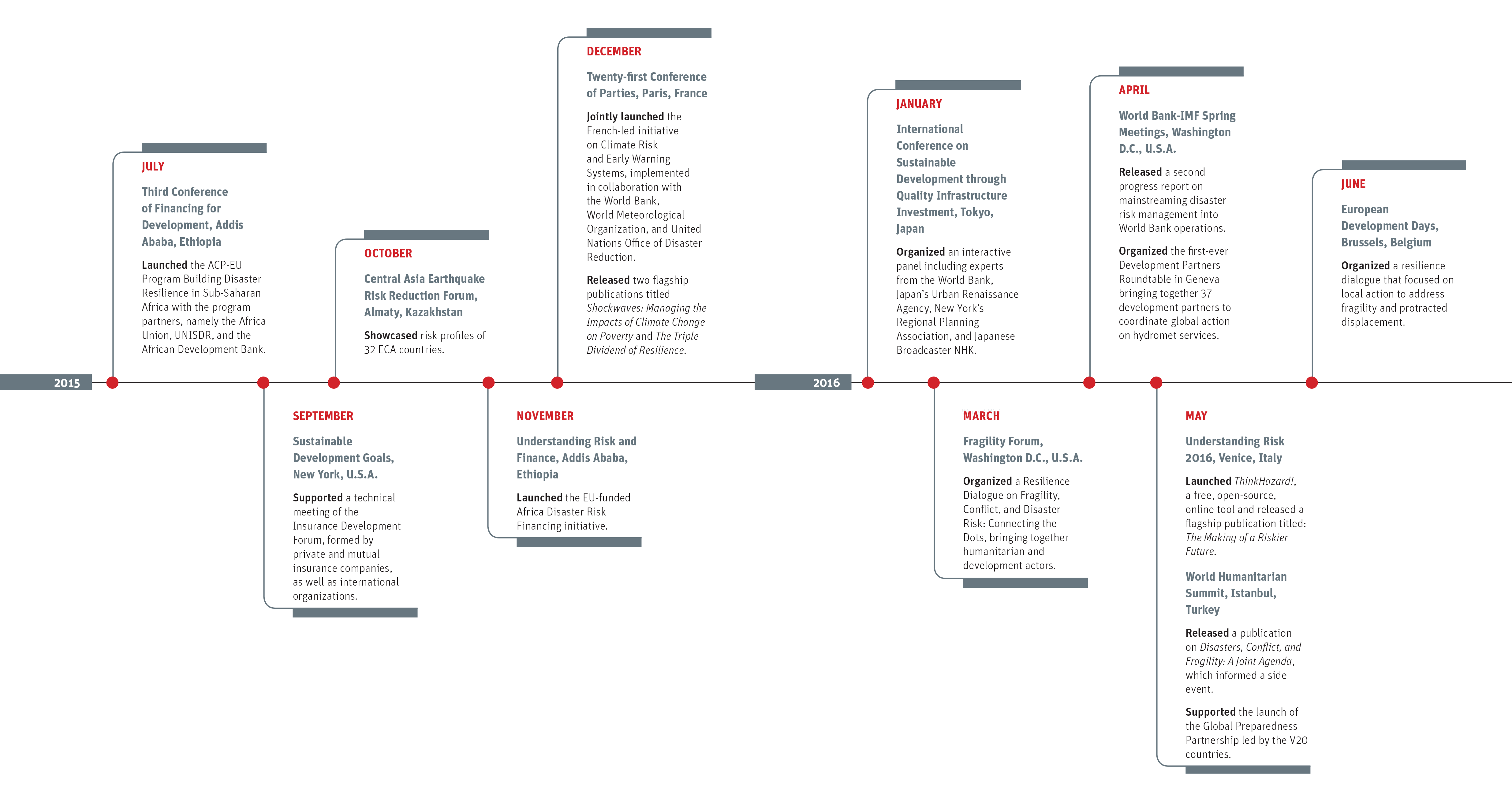 A Year of Action and Consensus

FY16 saw GFDRR continue to deliver strong outcomes at the same time that its core mission of building resilience was bolstered by major new international agreements, including the Paris Agreement on Climate Change, the Sustainable Development Goals (SDGs), and the Sendai Framework for Disaster Risk Reduction.

The active portfolio of grants comprising GFDRR’s Country Program rose 11% year-on- year to $240 million across 70 countries, 25 of which were fragile and conflict-affected states. Disbursements during FY16 amounted to $63 million. This growth reflected continued demand in developing countries for support that builds long-term resilience to natural hazards and climate change. The program made strides towards helping scale up investments for resilience in fragile and vulnerable countries—including Togo, Myanmar, Uzbekistan, and Dominica—as well as supporting urgent recovery efforts in countries such as Nepal and Ecuador.

The international community placed resilience at the heart of the SDGs, the World Humanitarian Summit, and the Paris Agreement. GFDRR actively supported this global dialogue: it added to the evidence base informing global climate negotiations through flagship analytical reports such as Shock Waves: Managing the Impacts of Climate Change on Poverty, and it helped drive progress by convening new coalitions of public and private actors such as the first Insurance Development Forum. GFDRR’s technical engagement added to growing consensus on areas such as hydro-meteorological services, which saw growing support for delivering universal access to weather and climate information to empower citizens to protect themselves from natural hazards.

GFDRR sustained strong momentum on delivering resilience outcomes at global scale, reflecting the engagement of the donors contributing to its Multi-Donor Trust Fund and to special programs supported by the European Union and Japan. Technical assistance grants were deployed strategically to crowd in much larger investments for resilience. This was exemplified in South Asia, where GFDRR grants influenced a total of $1 billion in development financing during FY16 as governments and donors rallied around the need to scale up risk reduction. GFDRR’s Thematic Initiatives pushed the frontier of practice in areas such as geospatial data, risk financing, and resilience of small island states.

FY16 saw special attention to women’s empowerment as a cross-cutting theme. In FY16, 62% of GFDRR grants were gender-informed, of which two-thirds had specific actions to empower women. GFDRR’s Consultative Group approved a Gender Action Plan including a framework to track progress towards applying gender-sensitive approaches across all GFDRR grants.

Driving Outcomes at the Country Level

GFDRR’s Country Program financed demand-driven technical assistance in 70 countries during FY16. Activities spanned each continent, and were selected based on high impact potential through leveraging investments at scale or driving policy changes.

Africa received the largest share of GFDRR resources in FY16, with 23 countries supported. Engagements included the Africa Hydromet Program, where GFDRR joined with the African Development Bank, World Meteorological Organization (WMO), and others to support modernization of hydro-meteorological services nationally and regionally. New risk assessments were financed in Ethiopia, Kenya, Niger, Senegal, and Uganda, while GFDRR’s engagement in Mali helped design and mobilize a $22.75 million investment to expand access to weather information.

In East Asia and the Pacific, key interventions included a post-disaster needs assessment (PDNA) in Myanmar which informed more than $400 million in investments for emergency recovery from the devastating 2015 floods and landslides. GFDRR supported efforts to consolidate and scale up DRM efforts, such as through the Southeast Asia Disaster Resilience Program—which supports risk pooling in Cambodia, Lao PDR, and Myanmar— and through coordinated early warning and risk reduction investments in Pacific Island Countries. An important area of progress remains the Philippines, where a $500 million contingent credit line (a Catastrophe Deferred Drawdown Option) was approved, building on extensive groundwork supported by GFDRR.

In Latin America and the Caribbean, GFDRR continued to provide countries with sophisticated solutions such as advanced risk assessments and modeling to inform development policy and planning. Cities such as Medellin, Porto Alegre, and Mexico City have requested support to transfer catastrophe risk to the capital markets. GFDRR supported the expansion of the Caribbean Catastrophe Risk Insurance Facility to seven additional countries, supported a safer schools investment in Peru that benefited 278,000 students, and informed the design of a $150 million risk mitigation and emergency recovery project in Ecuador.

Advancing Practice through Knowledge and Tools

The Safer Schools initiative developed a platform to establish a global baseline for school infrastructure. This effort has yielded information on the location of over three million schools in its initial stages. The Hydromet Initiative prepared an Assessment of the State of National Hydrological Services in Developing Countries. GFDRR released a flagship report, Building Regulation for Resilience: Managing Risks for Safer Cities, and launched pilot programs in Ethiopia, India, and Armenia to support the roll-out of effective building codes and land-use planning.

The Small Island States Resilience Initiative supported more than 20 island nations in building investment pipelines and addressing technical challenges to withstand impacts of climate change. The CityStrength diagnostic tool was applied to inform dialogue that prepared a $250 million investment in urban resilience in Can Tho, Vietnam. On financial resilience, the Disaster Risk Financing and Insurance initiative rolled out a training program to more than 200 officials in 15 countries.

GFDRR deepened a number of partnerships that are driving progress on specific resilience challenges. With the WMO, United Nations Office for Disaster Risk Reduction (UNISDR), and the Government of France, GFDRR launched a new Climate Risk and Early Warning Systems (CREWS) initiative to finance weather stations, radar facilities, and early warning in countries where weather data is unreliable or lacking. It co-organized a Development Partners Roundtable to bring together 37 meteorological and development organizations and coordinate investments in hydromet capacity.

The Understanding Risk community took a step forward as the pre-eminent platform to bring together the wide range of professionals—from across disciplinary boundaries—whose engagement is needed to solve tough resilience challenges. The fourth global Understanding Risk Forum, held in Venice, brought together 350 organizations to catalyze new partnerships and initiatives. The first-ever Understanding Risk and Finance platform was held in Addis Ababa and focused on risk financing in Africa.

Resilience for a Changing World

Looking ahead, GFDRR worked with its partners to identify the priority gaps and needs confronting the global resilience agenda following the adoption of the Sendai Framework, SDGs, and Paris Agreement. On climate change, GFDRR aims to significantly scale up its support to catalyzing the large-scale investments and policy changes required to achieve the national goals embedded in the Paris Agreement. Efforts will focus on addressing the critical knowledge gaps and building pipelines of effective resilience investments ahead of the Paris Agreement’s first Global Stocktaking in 2023, building on the momentum around the Paris Agreement’s ‘Nationally Determined Contributions.’ Recognizing that rapid urban growth is creating unprecedented new concentrations of risk, while presenting new opportunities for effective interventions at the municipal level, GFDRR also laid the groundwork for a scaled-up engagement on urban resilience.