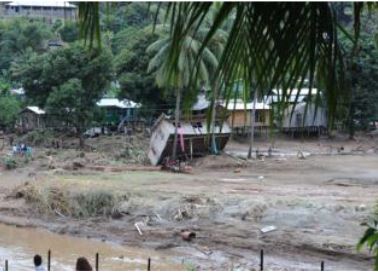 As a small Pacific island state, Solomon Islands is particularly vulnerable to natural disasters. Catastrophic risk modelling by the World Bank suggests that the Solomon Islands is expected to incur, on average, US$20.5 million per year in losses due to earthquakes and tropical cyclones.  Honiara is the capital city of the Solomon Islands and serves as its main transport hub and economic, political and educational center. It is the most densely populated area of the country.  Some 52,000 people are estimated to have been affected by the April 2014 flooding, equivalent to around 10 percent of the population. Up to 80% of the capital’s population were affected.  This includes those who had their properties destroyed or severely damaged, as well as those who lost their livelihoods (for example, through damage to their food gardens).  There was also significant disruption to transport, with key bridges around Honiara being washed away.  Furthermore, some 35% of residents live in informal settlements, which are now spreading beyond the City boundary, often in houses susceptible to cyclones and floods.  This has the potential to increase the risks to the population from flooding, as more people move into flood prone land.

The project objective was to investigate urban flood risk and provide quality information to better manage and reduce flood risks in the greater Honiara area, thereby building and strengthening the city’s disaster preparedness and resilience to weather extremes.

The project supported the Government of the Solomon Islands with a study to investigate urban flood risk and provide quality information on how flood risk can be better managed and reduced in the Greater Honiara area, thereby strengthening the city’s disaster preparedness and resilience to weather extremes. The study was finalized in April 2021 (see link below).

Several key other analyses were conducted in collaboration with both central and local  government agencies, namely the Honiara City Council, the Guadalcanal Provincial Council, and the Ministries of Environment and Planning. These included the drafting of five working papers which support the design and development of fit-for purpose flood modelling for  Honiara’s main river system. The draft papers took flooding ‘hot spots’ into consideration, as well as both hard and softer mitigation options.

National and local stakeholders have been widely consulted in the frame of the development of the study to investigate urban flood risk in Honiara.