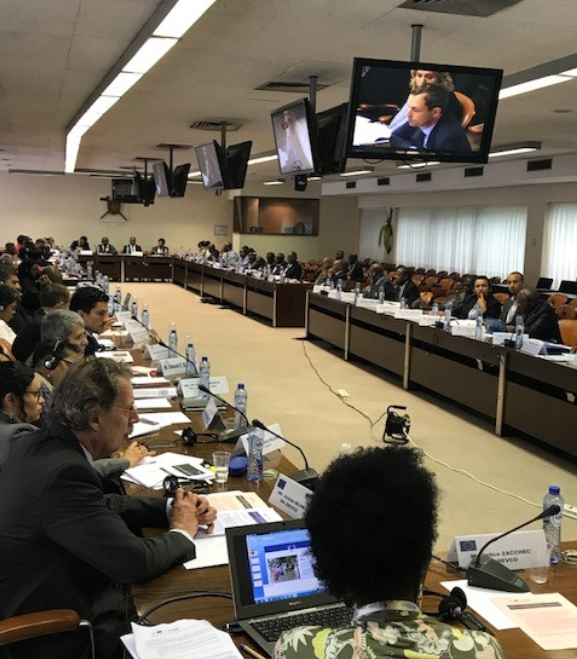 On 9 June 2017, more than 100 participants including ministers, permanent secretaries, ambassadors, disaster risk management (DRM) coordinators, recovery advisors and policy officers from African, Caribbean and Pacific (ACP) countries attended a “Focus Day” on lessons learned from post-disaster response in ACP countries in the frame of the ACP-EU Natural Disaster Risk Reduction (NDRR) Program. The Focus Day, organized by the Global Facility for Disaster Reduction and Recovery (GFDRR) and hosted by the ACP Secretariat in Brussels, took place in conjunction with the third edition of the World Reconstruction Conference (WRC3).

The core objective of this one-day workshop was to bring together officials from ACP countries, the ACP Secretariat, European Union (EU), United Nations Development Programme (UNDP) and GFDRR/World Bank, to strengthen the discourse on post-disaster response activities in ACP countries since the ACP-EU NDRR Program inception in 2011. The Focus Day also aimed at promoting intra-ACP knowledge exchange of best practices and lessons learned on post disaster response.

“The raison d’être of this event is to create interaction between political actors and actors that are on the ground and to therefore find useful synergies to better tackle disasters.” Ambassador Léonard-Emile Ognimba, ACP Assistant Secretary General - Political Affairs and Human Development, ACP Group of States

The workshop introduced the background and institutional framework surrounding Post-Disaster Needs Assessments (PDNAs), which are key to the mobilization of resources and international development assistance after a disaster.

“The Focus Day is important to share experiences and lessons learned from countries that were affected by disasters. It is also a chance to take stock of how the ACP-EU NDRR Program has provided support, especially on post-disaster response.” Mr. Felice Zaccheo, Head of Unit for Sustainable Energy and Climate Change, DG DEVCO, European Commission

The sharing of country experiences and lessons learned from the three regions triggered intensive discussions. From the viewpoint of ACP countries, disasters create a window of opportunity for mainstreaming disaster risk reduction and climate resilience into recovery and development policies. ACP delegates underscored that recovery and reconstruction efforts need to adopt a holistic, multi-stakeholder and resilience-based approach to risk-informed development. Integrating sectoral recommendations in recovery plans was considered key in this regard.

”Case studies help to clear up some of the misunderstanding that encapsulate frameworks and guidelines. The views from bigger African countries as well as smaller Pacific countries, from landlocked countries as well as island countries, help the discussion and in getting the buy-in from colleagues who yet have to be more familiar with this framework.” Hon. Mr. Siaosi Sovaleni, Deputy Prime Minister and Minister of MEIDECC, Tonga

From the ACP-EU NDRR Program’s perspective, the Focus Day confirmed that the vast majority of country delegates appreciate the support received so far. The Program has had an impact by contributing to building capacities at country and regional level, and to leveraging additional financing from other sources. Looking ahead, the Focus Day has reminded everybody of the importance to have regular intra-ACP knowledge exchange mechanisms and highlighted the need for organizing more South-South and regional cooperation activities.

“Today was a great opportunity to listen to first-hand country experiences and lessons learned. We will continue cooperating with the ACP Secretariat and the European Union on best ways to exchange knowledge such as in today’s event.” Manuela Chiapparino, Team Leader, ACP-EU Natural Disaster Risk Reduction Program, GFDRR

Powerpoint presentations on GFDRR, the ACP-EU NDRR, PDNAs and DRFs