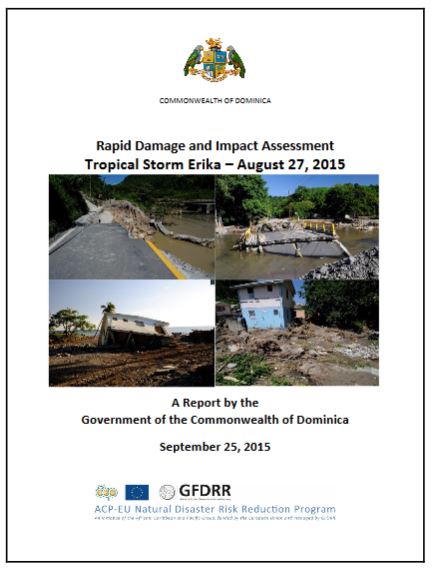 In the early hours of August 27, 2015, Tropical Storm Erika passed over Dominica producing intense rainfall across the island resulting in flash flooding, landslides, and mudslides which affected most parts of the island.

This grant supported the response to a request submitted on August 28, 2015 by the Government of Dominica to:

The Rapid Damage and Impact Assessment that was produced formed the basis for the Government of Dominica to mobilize resources from development partners, begin recovery planning and source reconstruction funding.

The Government of Dominica organized a Development Partners Conference on November 16, 2015 in Roseau based on the outcomes and recommendations outlined in the report. The conference was attended by foreign government representatives, and regional and international organizations. The OECS commission, EU, DFID, CDB, Canada, Japan, Australia, Mexico and Venezuela and the World Bank were among the participants. Many of these organizations and countries expressed their support for reconstruction of damaged infrastructure through their on-going projects and some pledged specific supports. For example, DFID pledged an indicative amount of £20 million, Venezuela provided construction materials for housing reconstruction, Mexico pledged $2.5 million for resettlement, Japan gave $1.7 million in form of equipment, and CDB approved a $30.8 million loan to support reconstruction.

The EU, through the Caribbean Disaster Emergency Management Agency's (CDEMA) Regional Response Mechanism, was informed daily during the weeks after the disaster on the disaster response process. The Rapid Damage and Impact Assessment was shared with the EU on completion.

The Post Disaster Needs Assessment can be found here.