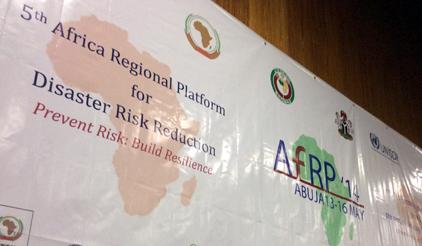 The project helped to facilitate the participation of senior government officials from Sub-Saharan African countries at the 5th Africa Regional Platform in Abuja, Nigeria on May 13 - 16, 2014, to review the progress of disaster risk reduction in Africa and consolidate Africa’s contribution to the Post-2015 Framework for Disaster Risk Reduction (the Sendai Framework for DRR).

The 5th Africa Regional Platform formalized and strengthened the finalization of the African Position on the Post-2015 Framework for DRR, and adopted a declaration. This declaration is a key instrument to frame the overall outcome of the African Regional Platform for Disaster Risk Reduction, including the validation of core elements of the Post-2015 Framework for DRR.

The consultations before and during the 5th Africa Regional Platform, as well as stakeholder commitments, were used to build the declaration. The declaration, together with the African contribution to the Post-2015 Framework and with stakeholder commitments, was submitted to the Preparatory Committee of the Third UN World Conference on Disaster Risk Reduction (which held its first meeting on (first meeting in Geneva, Switzerland, on 14-15 July 2014) as well as to the African Union Summit.

The World Bank as the implementing agency directly managed the activity. The primary beneficiary of the activity were the regional Member States (particularly DRM institutions). Other key stakeholders included: donors (EU, World Bank), UN agencies (UNISDR, UNDP), NGOs working in DRM and technical institutions and service providers and universities. The project engaged with stakeholders mainly through consultative workshops, other forums and direct contact.