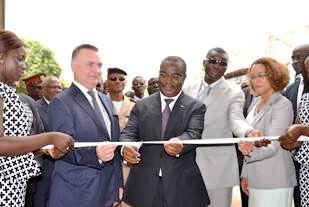 The inauguration ceremony of the warehouse on June 7, 2016 in the presence of various government ministers, the representatives of the Togo national Assembly, the World Bank Country Manger Ms. Joelle Businger, and Dr. Vladimir Kovshinov, International Civil Defence Organisation General Secretary, whose organisation provided the emergency equipment.

The primary objective of the project was to improve the conditions for flood risk management and preparedness in Togo. To achieve this, the project aimed to:

Activities were implemented around three components:

Partnerships and coordination
The Togo IDLM was implemented in collaboration with the Togolese Ministry of Environment and Forest Resources.

A Results in Resilience story is accessible here.