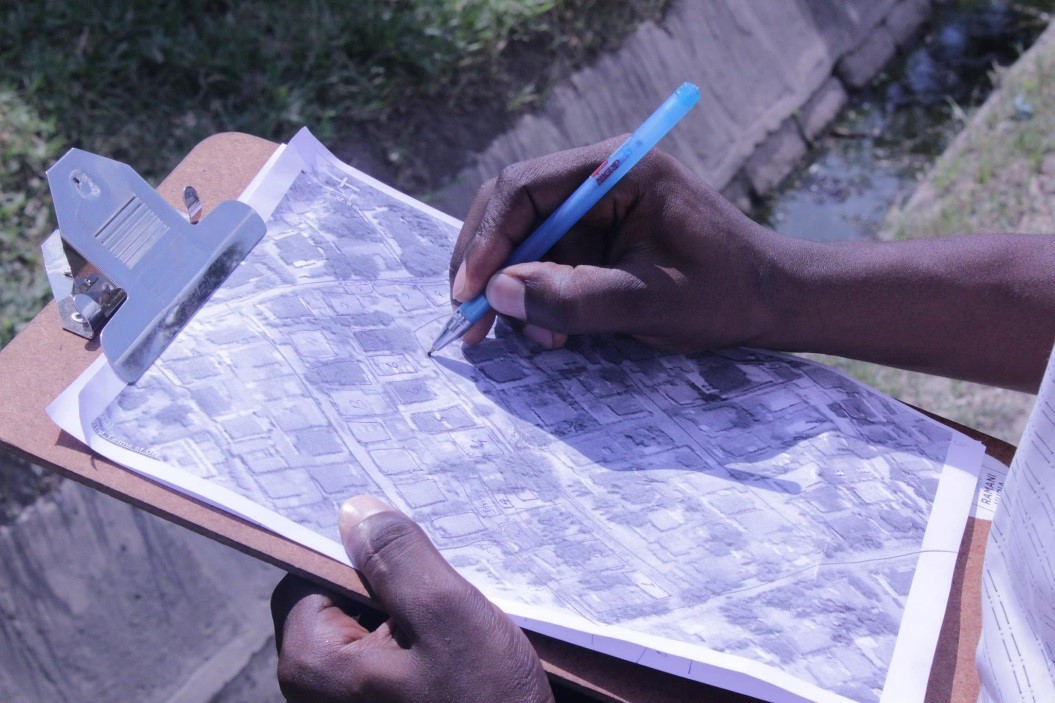 Context and Objectives
The Building Climate Resilience in Tanzania Water Sector project, implemented by the World Bank, started in May 2014 with the aim of reducing the vulnerability of rural and urban communities in Tanzania to hydromet hazards. The project was closed in September 2016 with the completion of activities under its two components on increasing the performance of critical water sector infrastructure in rural communities, and on urban flood risk mapping.

This project has supported an activity publicly known as Ramani Huria, which is Swahili for “Open Map.” Ramani Huria has enabled the collection of over 750,000 building footprints; 120 kilometers of imagery and surface models; 2,091 kilometers of roads; and tens of thousands of points of interest such as toilets, water points, schools and other critical infrastructure. Over 100 community members and 165 students of local universities were engaged in creating data and facilitating knowledge transfer on community-based flood and disaster issues.

By empowering communities to digitize their spaces through community mapping, the project supported the development of community awareness and demonstrated how to leverage citizen participation for hyperlocal data collection. This citizen participation is focused on vulnerable and flood prone areas—presenting an opportunity to empower ward officers and community leaders to identify and prioritize community resilience and action plans against flooding.

The project demonstrated how low-cost tools such as OpenStreetMap, drones and in-situ sensors can be scaled and provide a platform for innovation. There is great value in fusing traditional flood modelling techniques with local community-led participatory driven methods. Community knowledge is elicited on the extent of flooding from the last big flood, and through a participatory mapping process, the inundation extent is captured by community members drawing on the underlying map. It offers an opportunity for quick assessment of inundation from a community perspective complementing more complex techniques, such as hydrological modelling for a fuller understanding of flood inundation.

As part of the project, training on open data for mapping purposes was conducted to equip students, government and community members with valuable skills to improve Tanzania’s development planning. The training took the form of 43 sessions with varying target audiences that covered topics including Java OpenStreetMap, InaSAFE, QGIS, data quality and quantity, and general map creation. These sessions reached 830 citizens of Tanzania, including university students, government and community members, as well as local team members. Ten additional workshops were delivered in collaboration with CSOs and universities—particularly the Tanzanian Red Cross Society, one of the key implementing partners—to establish community-led emergency response mechanisms in urban areas.

The Ramani Huria project was showcased during the Africa Open Data Conference from September 2–5, 2016, which included over 450 participants from African governments. The project was featured as a major innovation in sourcing low-cost mapping data, citizen data and building community, student skills and collaboration for urban flood risk assessment and management. The innovative, citizen-based participatory approach has already started to spread to other cities (such as Stone Town, Zanzibar) which have adopted the participatory mapping methods pioneered by Ramani Huria.

A closing workshop, attended by over 150 stakeholders (community members, local and national government, development partners, and civil society) was held on November 27–28, 2016 in Dar es Salaam. At the event, copies of the Risk Profile Atlas were disseminated and an agreement made to form committees on harmonizing data across Dar es Salaam, providing a foundation for a national framework of urban open data sharing.

The project has been implemented by the World Bank, in partnership with Education Skills project and Urban projects and development partners from the Nordic Development Fund. Activities were coordinated through the water sector development partners group which includes 21 bilateral donors and multilateral agencies and is co-chaired by the World Bank. The EU representation in Tanzania has been in communication about the project with the WB/GFDRR. Coordination is expected to occur through the leading the EU project “Adapting to Climate Change in Coastal Dar es Salaam.”

A video on Ramani Huria, community mapping in Dar es Salaam, can be found here.

More information on Ramani Huria can be found here.

Information on the Code for Resilience Tanzania can be found here.