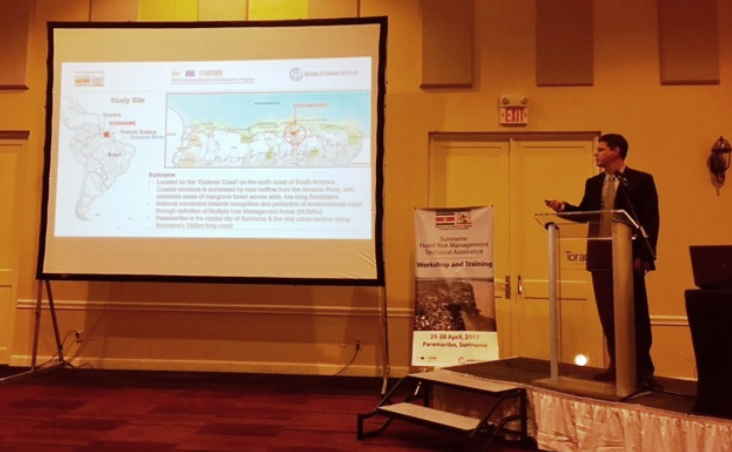 Presentation of the final results of the flood risk assessment, the coastal resilience assessment and the flood mitigation options and investment plans in Suriname. Source: World Bank

This project’s objective was to assess flood risk in the Greater Paramaribo area, in order to support the Government of Suriname to prioritize targeted flood risk reduction investments. The grant provided an initial baseline and analytical tools for flood risk management. This helped Suriname to develop a program of strategic interventions and policies to address recurrent flooding and the anticipated impacts resulting from climate change.

Component 1: An analysis were undertaken of the flood risk within Greater Paramaribo, including:

The project team regularly held meetings with the Ministry of Public Works of Suriname and the National Coordination Center for Disaster Control. Other local partners such as the Anton de Kom University of Suriname, Conservation International (CI), National Institute for Environment and Development (NIMOS), Center for Agricultural Research (CELOS), and WWF were instrumental in providing and suggesting sources of useful data and analysis crucial to the assessments.

The Project team and World Bank officials regularly conducted meetings with the officials based at the Delegation of the EU to Guyana, Suriname, Trinidad & Tobago and for the Dutch Overseas Countries and Territories in Georgetown, Guyana. Furthermore, the project team coordinated with other ongoing EU-funded projects in Suriname.

The project team conducted periodic meetings to ensure that the technical assistance remained in cohesion with the initiatives led by other development partners such as UNDP, Inter-American Development Bank (IADB); the international development community such as the Dutch Embassy, the French Development Bank (AFD), and private sector organizations.