Saint Lucia: Measuring the Impact of Disaster Events on Poverty and Social Vulnerability 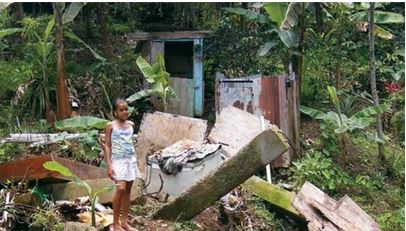 A young girl stands outside a home destroyed by a rainfall-triggered landslide in Castries, Saint Lucia, in 2013. Source.

Saint Lucia is exposed to high levels of risk from meteorological and geologic hazards which have significant negative impacts on its economic and fiscal stability. Since 2010, two major natural disasters have impacted Saint Lucia - Hurricane Tomas in 2010, resulting in losses of about 40% of GDP, and severe flooding in 2013, resulting in losses of about 8% of GDP.
The Measuring the Impact of Disaster Events on Poverty and Social Vulnerability project was approved in response to the government’s request for support in better targeting the poor and socially vulnerable in comprehensive Disaster Risk Management (DRM) and Social Protection programs.

This project aimed to analyze the impact of natural disasters on social vulnerability in Saint Lucia, in order to inform DRM and other relevant strategies and policies to, in particular, better target the poor and socially vulnerable in a comprehensive DRM Program.

The project undertook the following activities:

This project was implemented by the World Bank Caribbean Disaster Risk Management team within the Social, Urban, Rural and Resilience Global Practice, with support from the World Bank Poverty Global Practice, in close collaboration with relevant government departments and other domestic stakeholders. The team also worked closely with the Statistical Office in Saint Lucia. In addition, coordination with EU-funded activities was undertaken through coordination with the EU Delegation in Barbados.