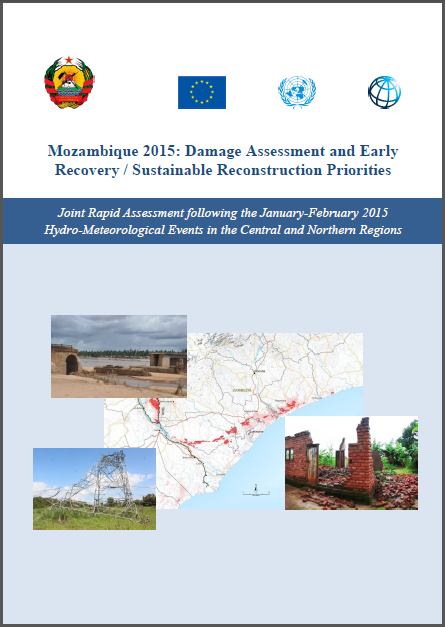 Starting January 12, 2015, Mozambique experienced widespread flooding in the Zambezia province. Floods extended to neighbouring Nampula and Niassa provinces. Official data indicates that 157,000 people were affected by the floods (125,000 in Zambezia, 12,000 in Niassa and 20,000 in Nampula) and points at a death toll of 158 (out of which 134 in Zambezia province). 1953 classrooms were damaged.

On February 25, 2015 the Government requested support for a rapid assessment, to which the World Bank, United Nations and European Union positively responded. A mission co-financed by the ACP-EU NDRR Program was carried out from March 3 to 13, 2015. The objectives were to

The assessment found that the estimated damage from the floodings is in the order of US$213 million, or 1.3 percent of national GDP. The total recommended recovery and reconstruction priorities amount to US$464 million, out of which US$281 million are for roads and bridges, US$67 million for drinking water supply, US$46 million for agriculture and fisheries, US$14.5 million for energy, and US$12.6 million for dikes. Activities contributing to the reduction of vulnerability with a long term approach amount to a provisional total of US$106 million.