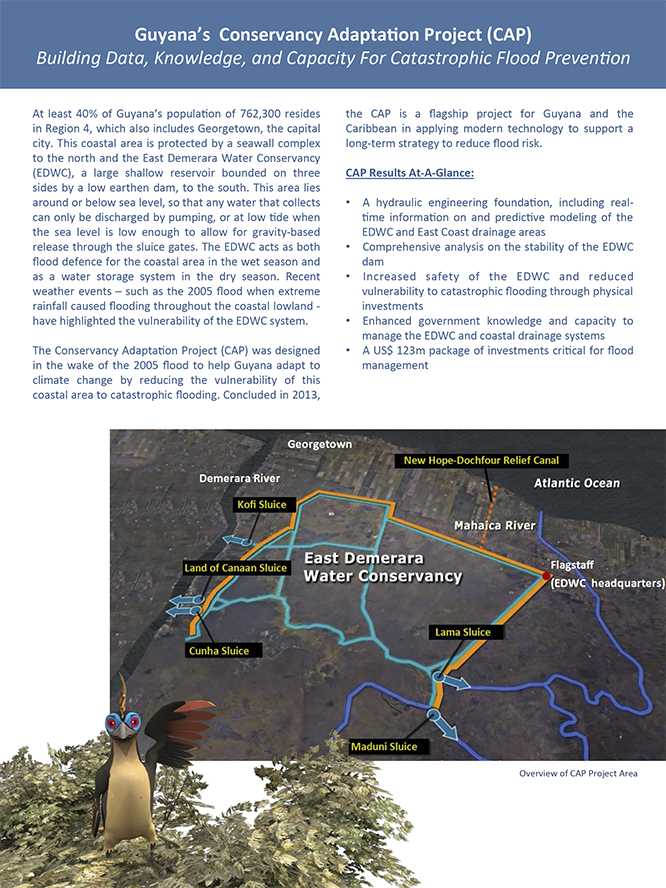 The Conservancy Adaptation Project (CAP) was designed in the wake of the 2005 flood to help Guyana adapt to climate change by reducing vulnerability of its coastal area to catastropic flooding, and was concluded in 2013.

A Workshop was held in Guyana on 7 March 2014, which was was organized by the Ministry of Agriculture of Guyana together with the World Bank. The CAP workshop, the publication of the project findings – “Managing Flood Risk in Guyana,” and the production of a video animation (https://goo.gl/dNlSB9) were co-funded by the ACP-EU NDRR Program, in the framework of the “Strengthening Guyana’s Coastal Lands Information Systems and Adaptation Awareness” project. The latter project aims at implementing a communications strategy for the CAP and at strengthening Guyana’s information systems on coastal lands. The project also strived to strengthen the level of coordination among stakeholders in the Government of Guyana and the donor community towards developing a more comprehensive flood control strategy, which would ultimately reduce Guyana’s vulnerability to catastrophic flooding.