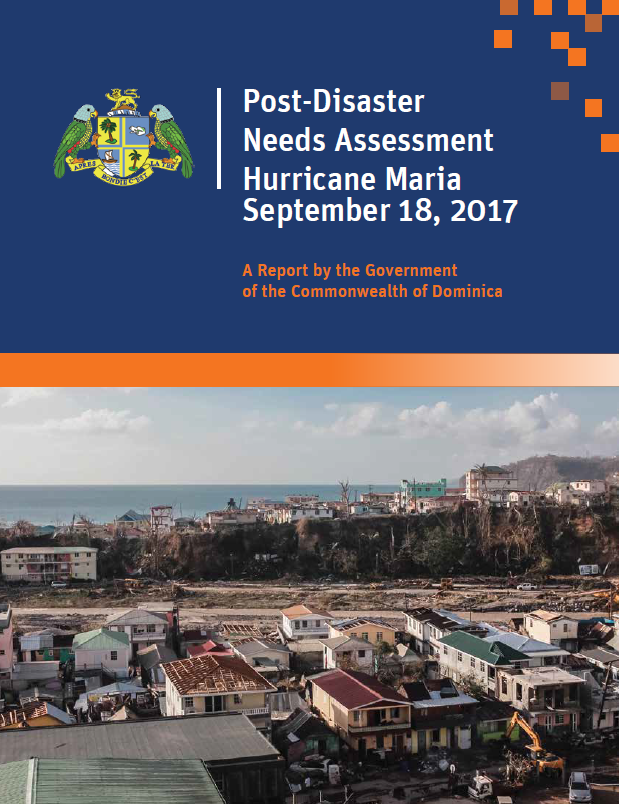 On 18 September, 2017, Tropical Cyclone Maria made landfall on Dominica as a category 5 storm with winds exceeding 277 km/h.  The government confirmed the death of 31 people and 37 people missing.

Following an official request from the government of Dominica for post-disaster assistance on 25 September 2017, the European Union (EU), United Nations Development Program (UNDP) and the WB/GFDRR supported the government in undertaking a post-disaster assessment, in close collaboration with the Caribbean Disaster Emergency Management Agency (CDEMA) and the Caribbean Development Bank.

Financed by the ACP-EU NDRR Program, the PDNA served to:

The PDNA found that the total damages in Dominica were estimated at EC$2.51 billion (US$930.9 million) and losses to EC$1.03 billion (US$380.2 million). Most damages were sustained in the housing sector (38 percent), with damages of about 90 percent of the country’s housing stock. Furthermore, electricity service ceased completely in Dominica in the aftermath of Hurricane Maria, due to the widespread and severe damages to the electricity network.

The PDNA results were presented at a CARICOM-UN High Level Pledging Conference in New York City in November 2017, with the objective to mobilize support and commitment of pledges to help Caribbean countries with reconstruction and resilience building efforts.

The PDNA informed the overall recovery action plan and strategy in Dominica, and the mobilization of resources from financial institutions and development partners. The latter includes financing from the World Bank of a Housing Reconstruction Emergency Recovery Loan (US$40 million), an Emergency Agriculture Program (US$25 million) and additional financing (US$31 million) to the Disaster Vulnerability Reduction Project.

Building on the recommendations of the PDNA, the ACP-EU NDRR project approved the project Enhancing Resilient Reconstruction in Dominica.

The PDNA was conducted by the WB/GFDRR in coordination with the EU, UNDP, the Eastern Caribbean Central Bank the Caribbean Development Bank.

The PDNA report can be found here.

A Results In Resilience story is available here.